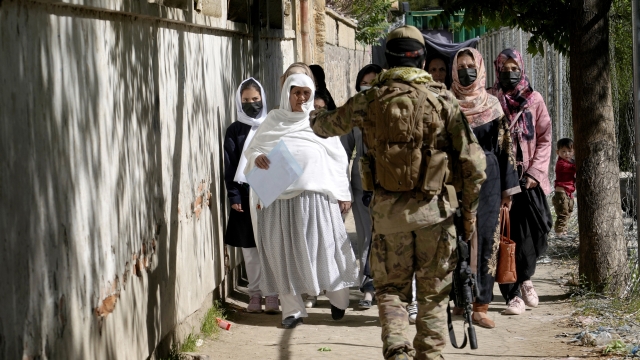 Since the Taliban took power, women have been deprived of their basic rights, including adequate food, the right to work and the opportunity to complete their education.

Hezbollah reporter Khan captured footage of women trapped in cages and fighting for food in his home in Afghanistan.

“Currently the Taliban are using women’s rights for their negotiations,” Khan said.

He calls it a glimpse of daily life since the Taliban took power last fall.

“They have no source to feed their children, to feed themselves, so the economic crisis is unprecedented,” Khan said.

There is a nationwide hunger crisis, of which women are the main victims. According to the UN, 100% of households headed by women do not have enough to eat.

Many women are now unable to work; female employment in the country is expected to drop to 28% or less this year.

Khurram is a United Nations Youth Representative and student in Berlin, Germany. She fled her home in Afghanistan to pursue her studies.

“I left the day Kabul airport was attacked,” Khurram said. “That night, I went by road, and I went through every province, and it took me two days and two nights.”

The remaining women have been deprived of their basic rights, including education.

The Taliban has reneged on its promise to allow all girls beyond grade six to return to school in March, citing a lack of space to separate the sexes.

What currently exists is uneven, with girls in some provinces returning to school, but not all, according to a report by the Afghanistan Analyst Network.

“In most rural parts of the country, what has made it easier for insurgent groups to recruit young people is the lack of education and job opportunities,” Khurram said.

In March, the United States joined a host of nations pledging $204 million in additional humanitarian aid while calling for women’s right to learn.

However, a report by UN advisers blames the humanitarian crisis in part on the United States for withholding billions of dollars in assets – something the State Department calls inaccurate.

Ayoubi is an Afghan-born activist and entrepreneur who uses her textile business to employ women in the country while living abroad.

“I’m also working with a group of friends to build an online school so that women and girls who can’t go to school can go to school online and we have these courses for them,” said said Ayoubi.

She is not alone – other activists are spreading education to women, despite the risk.

But the education of men is also threatened. Schools with large Hazara Muslim populations have been the target of bomb attacks, killing dozens of people in the past week alone.

“The Hazaras are killed while worshipping, while praying, and they are just an ethnic minority, very peaceful people,” Ayoubi said. “They don’t deserve this.”

Activists inside the country are losing another battle: the war of words.

Khan is using social media to spread the word, but it’s risky.

“All the attention on Ukraine is very important, of course, because it affects the whole world, but even a fraction of it is not given to Tigray, Yemen, Afghanistan, the Syria and the rest,” Ghebreyesus said.

Khan says he doesn’t blame the West; he blames the Taliban. But he is frustrated, saying he feels abandoned by his fellow journalists.

“They live in hell, and they have the power to take them out of hell,” Khan said.

Khurram says that although she misses her homeland, being abroad gives her the freedom to speak.

“I cannot remain silent, and I owe this country which has given me so much, which has made me who I am today,” Khurram said.

She is part of a new generation that has tasted democracy and will not give up.