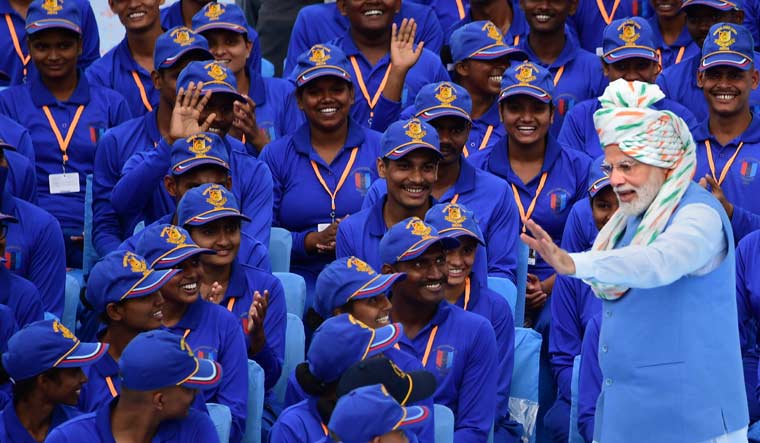 Women’s rights activists unimpressed by Modi’s eulogy on women; ask him about the realities on the ground

On Monday, Prime Minister Narendra Modi urged people to pledge not to do anything that undermines the dignity of women, saying a mentality of insulting them in their speeches and conduct has crept in.

The remark prompted opposition parties and activists to question the government on the implementation of pro-women policies on the ground.

Addressing the nation from the ramparts of the Red Fort on the occasion of the 76th Independence Day, Modi said respect for women is an important pillar of India’s growth and stressed the need for expand support for “nari shakti”.

“What I wish to share is that it pains me to say that we have witnessed a perversion in our daily behavior. We have casually used language and words that are insulting to women. Can’t we not commit ourselves to getting rid of everything in our behavior, our culture and our daily lives that humiliates and belittles women,” the Prime Minister said.

“Women’s pride will be a huge asset in realizing the nation’s dreams. I see this power and so I insist on it.”

Modi said the power of women can be seen in all professions, including in the field of law and its application.

“Look at the public representatives in the rural area. Our ‘nari shakti’ is devotedly engaged in solving the problems of our villages. Look at the field of knowledge or science, the ‘nari shakti’ of our country is visible all top . Even in the police, our ‘nari shakti’ takes responsibility to protect the people,” he said.

Modi said he could foresee a multiple increase in women’s participation in public life over the next 25 years, and therefore their power was beyond assessment.

“Everything is beyond your parameters. The more we pay attention to this aspect, the more opportunities and facilities we provide to our daughters, they will give us back much more than that,” he said.

“They will take the country to a new height. If the great efforts of our nari shakti’ are added to the hard work that is required to realize the dreams in this Amrit Kaal’, then it will take less hard work and our time limit will be also reduced. Our dreams will be more intense, more vivid and more resplendent,” he said.

Women and Child Development Minister Smriti Irani tweeted that the prime minister was “sensitive” to the issue.

“Making an emotional appeal to protect the dignity and honor of women from the ramparts of the Red Fort shows the sensitivity of Prime Minister @narendramodi ji. Every woman in the country is committed to fulfilling every dream to make India developed on strength of its strength and potential,” Irani tweeted.

Stressing the importance of a united nation, Modi said India has a lot to teach the world about the concept of unity which starts with family structure.

Gender equality is the key to a united India, he said, adding that without equal prominence for sons and daughters in family structures, the idea of ​​unity will be lost.

“We should celebrate India’s diversity. Here too, the roots of unity are sown when son and daughter are equal. If they are not, the mantra of unity cannot resonate. I hope we can get rid of this superior-inferior or mine-other attitude,” Modi said.

“Gender equality is a crucial parameter of unity,” said the Prime Minister.

He said the citizens were proud of the strength of Indian women such as Rani Laxmibai, Jhalkari Bai, Rani Chennamma and Begum Hazrat Mahal. Indian women symbolize sacrifice and struggle, Modi added.

Women’s rights activists, however, were less than impressed with the eulogy and questioned Modi about the actual implementation of women’s programs on the ground.

Akancha Srivastava, a social activist and founder of the Akancha Srivastava Foundation, a non-profit organization that works for cybersecurity literacy, said the first and most important issue is women’s safety and education.

She asked where are the practical security measures that were to be implemented with the Nirbhaya fund.

Kavita Krishnan, a member of the All India Progressive Women’s Association, pointed out that in the last budget, the budget devoted to gender had fallen from 0.71% of GDP in the revised estimates for 2021-22 to 0.66% in the budget estimates. from 2022-2023.

Yogita Bhayana, a women’s rights activist who runs People Against Rape in India, said Beti Bachao Beti Padhao “has also been spoken of from the ramparts of the Red Fort, but we hear about atrocities against women every days.

On Monday, opposition parties also challenged Prime Minister Modi, asking him to look into his party’s attitude towards women.

TMC MP Derek O’Brien brushed off Modi and reminded him of the ‘Didi o Didi’ comment he made on West Bengal Chief Minister Mamata Banerjee during a campaign rally in the state.

CPI Secretary General D. Raja also urged the Prime Minister to examine the attitude of men in his own party towards women.

Shiv Sena leader and Rajya Sabha MP Priyanka Chaturvedi said Modi’s words did not match the actions on the ground.