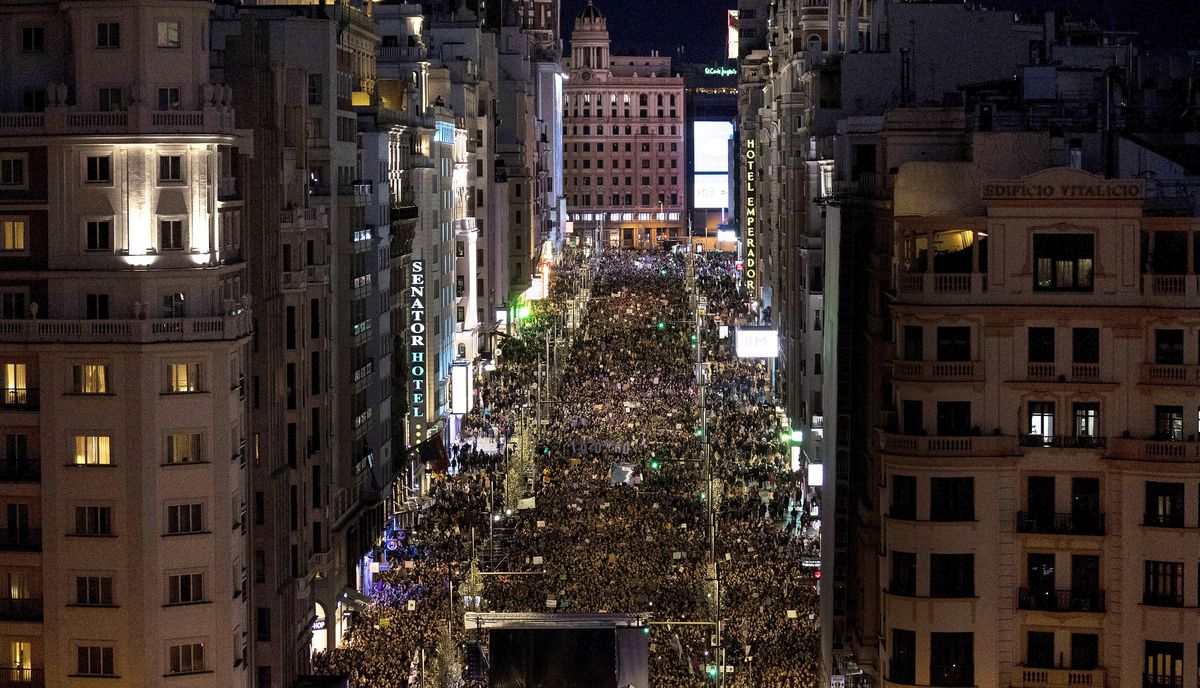 Tens of thousands of people took to the streets of Spain on Sunday evening to participate in walks across the country for International Women’s Day. The reasons for the protest were the same as those which inspired the mass protests of the past two years: gender-based violence, the gender pay gap, sexism and the burden of unpaid work.

The strength of the Spanish feminist movement was just as evident as in other years. From Bilbao in the north of the Basque Country to the eastern region of Valencia, the streets were filled with people calling for greater gender equality. Turnout, however, was not as high as during the 2018 and 2019 protests, given concerns over the coronavirus and divisions within the women’s movement over the transgender community.

Despite this, tens of thousands of people still took to the streets – an indication that the feminist movement may have the greatest capacity to mobilize, especially in Spain, which has some of the largest women’s marches in Europe. This year, all Spanish political parties – with the exception of the far right Vox – took part in the protests. Even the conservative People’s Party (PP), which had not participated in the previous marches, took part in the demonstration. Members of the center-right Ciudadanos were also present, but had to quit the march in Madrid after being shouted out by some protesters for their relationship with Vox. Ciudadanos and the PP rule in several regional and local governments in Spain thanks to the support of the far-right group, which has used its parliamentary kingmaker position to push for controversial policies like the so-called “parental veto” , which gives parents the right to prevent their children from attending extra-curricular classes on issues such as LGBTQ + rights and teenage pregnancy.

Quien is piense que aprendemos based on insultos y amenazas, no our conoce en absoluto.

Whoever thinks that we learn from insults and threats, knows nothing at all. Yesterday we went to the march to defend equality between men and women as representatives of the only political party that has a woman at its head.

The demonstration in Madrid was once again the largest with 120,000 people marching under the banner of “Feminist Revolt. With rights, without barriers. Feminists without borders ”, according to the delegate of the central government in the Spanish capital. In Barcelona, ​​local police estimated that 50,000 people attended the Women’s Day march, a significant drop from 200,000 in 2019. In Bilbao, there were around 52,000 people, according to local police. , a figure similar to 60,000 in 2019. In the Basque city of Vitoria, 1,000 women have come together to form a human chain. In the southern city of Seville, the drop in attendance was more significant. According to official figures, 16,000 people took part in two separate marches, compared to 50,000 who took to the streets in 2019.

Protesters have used the coronavirus outbreak to highlight the issue of gender-based violence. In Madrid, several demonstrators held up signs with the message: “Sexism kills more than the coronavirus. “In Bilbao, thousands of demonstrators shouted:” Patriarchy kills more than coronavirus. And in Valencia, Lola and her husband wore face masks with the message: “Protect yourself from sexism.” Lola, however, said fear of catching Covid-19 led to lower turnout: “It’s less crowded than other years and I think that’s why. I just spoke to a friend of ours and she told us that she would not come because she is afraid of large gatherings.

In Madrid, protesters chanted against gender-based violence, shouting: “We are not alone, the murdered are missing” and “This is not an isolated case, it is patriarchy”. In Spain, 1,047 women were murdered by their partners or former partners since 2003, when official records began, and just 14 in 2020.

Another key issue was the gender pay gap. “I am here so that women have the same salary conditions [as men]said Rafa, who works with Spanish public rail operator Renfe. According to statistics, women in Spain earn 13% less than men for similar work, a figure that jumps to 23% when considered. as a gross annual figure.

But the protest went beyond gender-based violence and inequality. Protesters also marched for the environment, to end racism and to stop prostitution and surrogacy.