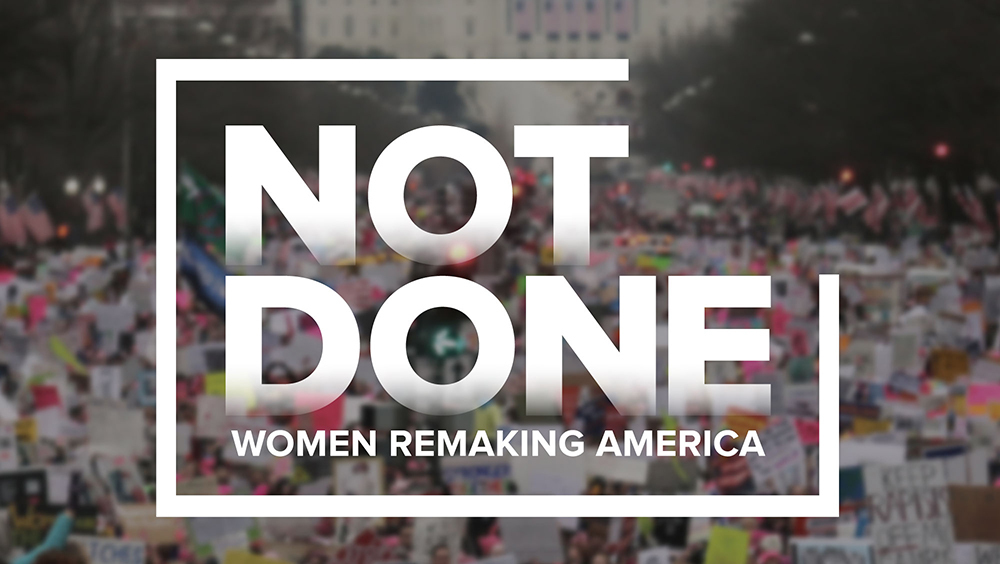 Women Remaking America: the women’s movement, told by those who live it

Roxane Gay, Kimberlé Crenshaw, America Ferrera and Gloria Steinem, each an influential and fearless woman in their own way, but what else do they have in common? Among other agents of change, they are presented in a new documentary retracing the history of the American women’s movement, as told by the women who live it.

NOT DONE: Women are reshaping America—A MAKERS movie from Verizon Media and McGee Media, which will debut on PBS on October 27 at 8 p.m. ET—extends the critically acclaimed PBS documentary series MANUFACTURERS: The women who make America.

The hour-long special documentary chronicles the seismic eruption of women’s organization from the 2016 elections until today, and the intersectional struggle for equality that has now become mainstream.

Like the movement it documents, this story is collectively told through the first-hand experiences and tales of frontline activists, writers, celebrities, artists and politicians who are reshaping culture, politics and , more radically, our notions of gender.

Premiered against the backdrop of an unprecedented pandemic and widespread social upheaval, the film looks back on recent milestones in the women’s movement, weaving a story of major progress with the clear reality that our work is not done.

“I was impressed to make this film and to see everything that has happened in the women’s movement since the last election,” said Dyllan McGee, Founder and Founder of MAKERS. NOT FINISHED executive producer. “Especially since we are now mourning the passing of a giant like Judge Ruth Bader Ginsburg, I am heartened by the heroic women in this film who continue his legacy.”

NOT FINISHED will feature conversations, stories and ideas from today’s most exceptional female and non-binary voices, such as Tarana Burke, New York Times reporters Jodi Kantor and Megan Twohey, Natalie Portman, and more.

“It has been a privilege to make this film and to capture the amazing leaders and change agents presented in it. NOT FINISHED is a testament to the tenacity and power of women who believe that no one is free until everyone is free, ”said Sara Wolitzky, Director of NOT FINISHED. “I hope audiences enjoy this heated chapter in feminist history and also be motivated, alongside the unstoppable women on screen, to continue to fight for true equality.”