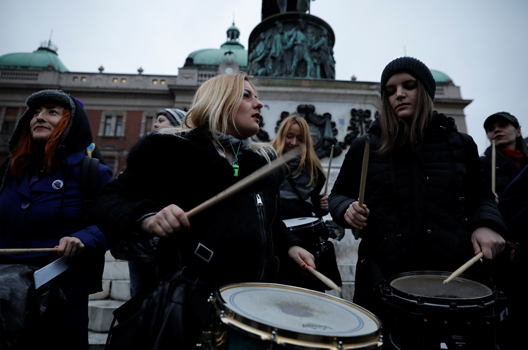 Women have assumed a greater role in the peace and security sectors in the Western Balkans since the end of the Yugoslav wars, thanks to government-sponsored National Action Plans. However, a conservative backlash against gender equality now risks undermining these gains. The momentum in the Western Balkans presents an opportunity for the European Union (EU) and NATO to do more to support the empowerment of women in the region as part of their peacebuilding policies and membership.

When women security experts from government and civil society from Albania, Bosnia and Herzegovina, Croatia, Kosovo [as understood in compliance with UNSCR 1244]the FYR of Macedonia, Montenegro and Slovenia were brought together by the Slovenian and Norwegian Foreign Ministries in Ljubljana on February 16 to discuss the successes and challenges they have encountered in attempts to increase the role of women in peace and security, they expressed deep frustration.

“Women’s rights and participation are now under threat across the region,” said Sonja Lokar, former director of the Central and Eastern European Gender Network (CEE Gender Network), at the event. “The role of women is diminishing in political parties, austerity is reducing the availability of services to women, international funding for gender equality programming is drying up, national institutions working on women’s issues are being undermined and the implementation implementation of 1325 National Action Plans (NAPs) is not a priority,” she argued.

These 1325 NAPs are based on United Nations Security Council Resolution 1325, adopted by United Nations (UN) Member States in 2000 at the twilight of the wars in the former Yugoslavia. During these wars, women faced years of forced displacement, torture and sexual violence. The resolution stresses the need for fundamental protection of women’s rights in times of war and recognizes that women can play an important role in war prevention, peace talks, conflict resolution, rehabilitation and governance. ‘after war. Bosnia and Herzegovina was the first country in the region to develop a national action plan to implement the resolution. Croatia, Serbia, Slovenia and the FYR of Macedonia soon followed.

The 1325 NAPs led to prioritizing the recruitment of more women into the military and police forces, and greater attention to women’s security and needs. As Captain Sanja Pejovic, the highest-ranking female officer in the Montenegrin Ministry of Defense described it at the Ljubljana event: “PAN 1325 has helped to ensure that women are encouraged to join the armed forces from Montenegro. Two gender coordinator positions have been created, gender and women’s rights have been included in pre-deployment training, high-level officers have been briefed on gender issues, and the ministry is applying gender-sensitive language. gender-sensitive in all of its materials.

Throughout the process of designing and implementing the 1325 NAPs, women decision-makers and activists from the Western Balkans have supported cross-border reconciliation, overcoming the ethnic mistrust and hatred that characterized the war years and the nationalist policies that justified ethnic cleansing. For example, the implementation of NAP 1325 in Bosnia and Herzegovina has forged links between various ministries, local authorities, universities and civil society despite the country’s deeply divided system of government and ethnically polarized society. In addition, the agency responsible for the implementation of the NAP in Bosnia and Herzegovina crossed the border with Serbia to support the government and civil society in the southern city of Nis to develop their own NAP.

However, creating effective conflict resolution and peacebuilding policies continues to be a challenge without more women at the negotiating table. In the Western Balkans, five peace agreements have been signed over the past two decades. Edita Tahiri, Kosovo’s former dialogue minister, was one of the only women present at either of the talks. “Women are dramatically underrepresented in peace talks. Women must be empowered to participate in peace processes. Women have different values ​​than men when it comes to peace, and they have strategic capital that needs to be promoted,” she said at the Ljubljana summit. Reflecting on her personal experience, she said that to “see women participating in peace talks, we need to empower women to succeed in political parties. Until now, women in civil society have not been able to access it.

Western Balkan women have gradually become more prominent in politics. Most countries have adopted quotas for women’s participation in parliament. Women represent 28% of MPs in Albania, 34.4% in Serbia and 37.5% in the FYR of Macedonia. All these figures are higher percentages than those obtained in many EU Member States or the United States, which stand at 19.4%.

Progress is slow, but women parliamentarians have taken steps to form joint cross-party caucuses to increase their influence on policy-making. In government and parliament, women continue to work together to advocate that new policies to address security threats are gender sensitive and that women can play a leading role in efforts to prevention and response.

However, alongside these gender equality efforts in the region, reactionary groups and activists have organized against any further advances in “gender equality”. In February, the Bulgarian government, which currently holds the EU presidency, gave in to conservative pressures which claimed that “gender equality” would undermine family values ​​and promote homosexuality. As a result, the government has withdrawn from ratifying the Council of Europe’s Istanbul Convention on violence against women. Slovakia soon followed suit, also refusing to ratify the Convention. The battle over this legislation has now shifted to Croatia, where Prime Minister Andrej Plenković has pledged to see the Convention ratified, despite claims from his party that this would lead to the introduction of a third gender in Croatian law.

Western Balkan women have worked for more than two decades to pave the way for peace and women’s empowerment, but they cannot meet these challenges alone. “Our capacities are not great enough to fend off all these threats to gender equality and women’s empowerment,” Tahiri said, adding, “Our struggle is not only regional but also global.” She appealed for help from international institutions, saying “we need our partners in NATO and the EU to set the conditions much clearer for progress on women’s empowerment.”

However, so far, no regional organization has applied such measures. The much-heralded EU strategy for the Western Balkans of February 2018 makes no mention of women and the need to advance gender equality.

While seeking international support, Western Balkan women have also reached out to help others in conflict situations by sharing their experiences. Over the past year, women from the Croatian non-governmental organization Documenta: Center for Dealing with the Past have traveled to Ukraine to share their technical skills on how to record and process war crimes in Conflicts. Tahiri has worked with women in Donetsk and Luhansk on their role in peace processes. Additionally, in Kosovo, women prepared an international petition for international justice for survivors of conflict-related sexual violence with the aim of supporting survivors in conflict areas, including Syria and Iraq.

There is a great need for solidarity and knowledge on how best to address gender-based violence in conflict. Western Balkan women peace activists are a tremendous resource that remains largely untapped and underutilized. The United States and the EU should take note of their efforts and skills in defining their strategies and policies towards the region.

Sabine Freizer is the Governance, Peace and Security Advisor in the UN Women Regional Office for Europe and Central Asia. You can follow her on Twitter @SabineFreizer. Any views or opinions presented in the text above are solely those of the author and do not necessarily represent those of UN Women.