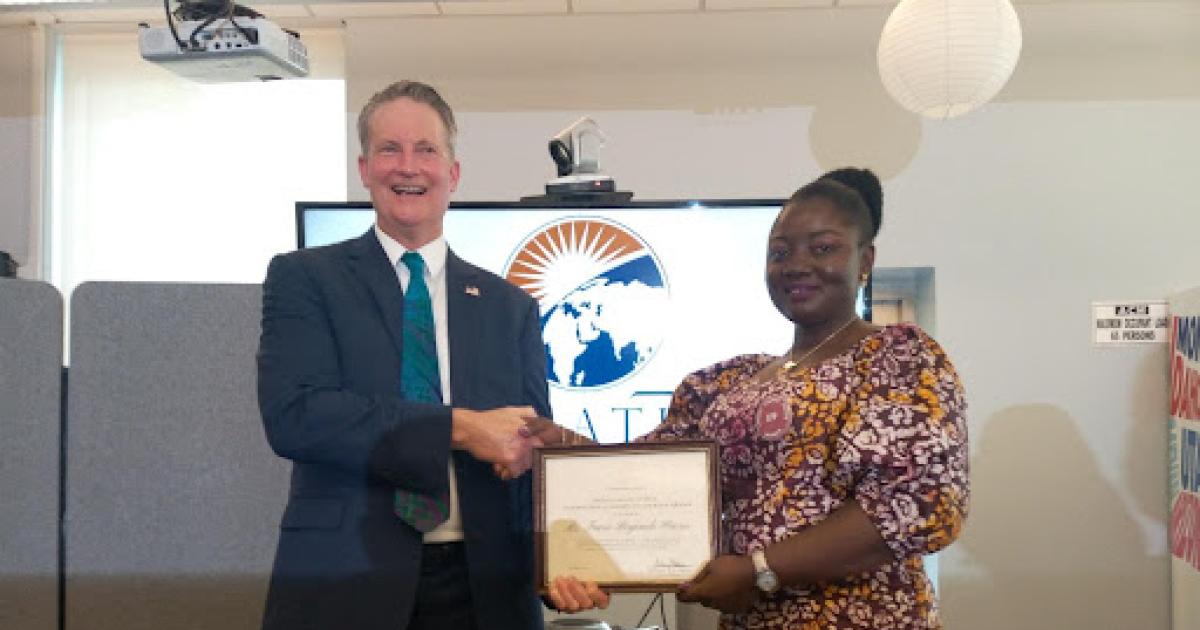 The US Secretary of State paid tribute to Facia Boyenoh Harris for advancing the rights of women and girls in Liberia.

Established in 2007, the annual International Women of Courage (IWOC) award honors women around the world who have demonstrated exceptional courage, strength and leadership to bring about positive change in their communities. , often at great personal risk and sacrifice.

Ms. Harris is the first Liberian in the program’s history to receive this prestigious award. To date, under the IWOC program, the US State Department has recognized more than 170 women from more than 80 countries.

The United States strongly believes that when women and girls are empowered and participate meaningfully in all areas of life, we are all safer, more prosperous, and more secure. Rooted in this longstanding belief, the Office of the Secretary for Global Women’s Issues is charged with an important mandate: to ensure that the rights and empowerment of women and girls, in all their diversity, are integrated into all of US foreign policy despite the existence of significant obstacles, and especially this year without a shortlist of crises, from Ukraine to Afghanistan. Women and girls around the world have persisted in making significant progress in advancing human rights, gender equity and equality, peace and security, the rule of law, responsibility and more.

“For 16 years, our office has proudly supported U.S. Secretaries of State by recognizing more than 170 outstanding women representing more than 80 countries as International Women of Courage. To the recipients of this year’s International Women of Courage award, I would like to to express my deepest admiration and gratitude for your tireless work and advocacy to advance the rights of women and girls in the face of grave risk and unforgettable sacrifice. Your courage, strength and leadership are truly inspiring , and the United States is deeply committed and privileged to honor and support you and so many other brave women and girls committed to ensuring that every person can live a dignified, safe, and fulfilling life” , said U.S. Secretary Antony J. Blinken at the 16th Annual International Women of Courage Awards (IWOC)

All winners have advocated for the protection of human rights, advanced gender equity and equality, empowered women and girls, in all their diversity, and promoted peace and transparency of governments in the world. world.

The awards ceremony was held virtually this year due to the ongoing COVID-19 pandemic. Ms. Harris is a long-time activist for women’s rights and against gender-based violence in Liberia.

As co-founder of the Paramount Young Women Initiative, she has worked for decades to combat the pervasive sexual assault and harassment of school-aged girls, create educational opportunities and provide leadership training for the next generation. of women leaders.

She is also a community organizer, from co-founding the Liberian Feminist Forum to facilitating coordination among women’s advocacy groups, to promoting neighborhood activism, where she organizes groups on issues as broad as political participation, sanitation and rape.

Ms Harris’ courageous activism – which in some cases has been accompanied by threats and harassment – began following the civil crises in Liberia, where rape, female genital mutilation and sexual harassment continue to threaten girls and women of all ages.

During the ceremony, Secretary of State Antony Blinken recognized Ms. Harris for her impactful and necessary work: “After Liberia’s civil wars, in which violence against women was widespread, Facia Boyenoh Harris s is dedicated to reducing gender-based violence and increasing women’s political participation. .

She has organized anti-rape marches, helped free protesters from jail, educated first-time women voters, trained democracy activists and worked with girls to ensure they know their rights, their value and their potential.

The First Lady of the United States of America, Dr Jill Biden, spoke about the power of women to change society: “Women have been told that they are dangerous, and that is because they are dangerous to corruption and injustice. When we raise our voices, we have the power to break down the shields of oppression. That’s why cowardly men prevent girls from learning. This is why women’s bodies become victims of war.

She remarked, “I am in awe of the heroines we celebrate, ‘You are journalists, peacemakers and prosecutors fighting organized crime and corruption. You are community leaders, testifying bravely against gang leaders. You are environmental advocates for Indigenous rights and LGBTQI+ rights. You have ended sexual harassment and raised the next generation of female leaders. You listen. You lead and show courage beyond belief.

At the US Embassy in Monrovia, where a watch party was held for Ms. Harris, her family, colleagues and friends, Ambassador Michael McCarthy spoke about the impressive culture of strong Liberian women leaders including Ms. Harris is part, “I will emphasize that even though Ms. Harris is the first recipient of the International Women of Courage award from Liberia, she is here because of a culture of strong and impressive Liberian women.

Then there is the mass action of Liberian women for peace and the many, many groups, such as the Liberian Feminist Forum and those who participated in the 2020 March for Justice, who have found inspiration and space for collective action in their wake.

And those who gave to make us here today: our grandmothers and their mothers. All this to say that Ms. Harris, in all of her truly impressive accomplishments as a tireless advocate for women and girls, was inspired, mentored and aided by the Liberian women around her. Ms Harris, who also graduated from the University of Liberia Law School this week, thanked those around her for their shared support and efforts.

“Today, we recognize the selfless and remarkable contributions of Liberian women to their social, economic, cultural and political achievements,” she remarked.

“To all the girls and young women, she concludes, you are already brave. Also remember, “if there’s a book you want to read, but it hasn’t been written yet, then you have to write it,” advice from Toni Morrison. To the women who have gone before us, we honor your work and the foundations you have laid. To women and girls now, let’s travel together.

Editor’s Note: Photo has been edited to reflect the present.