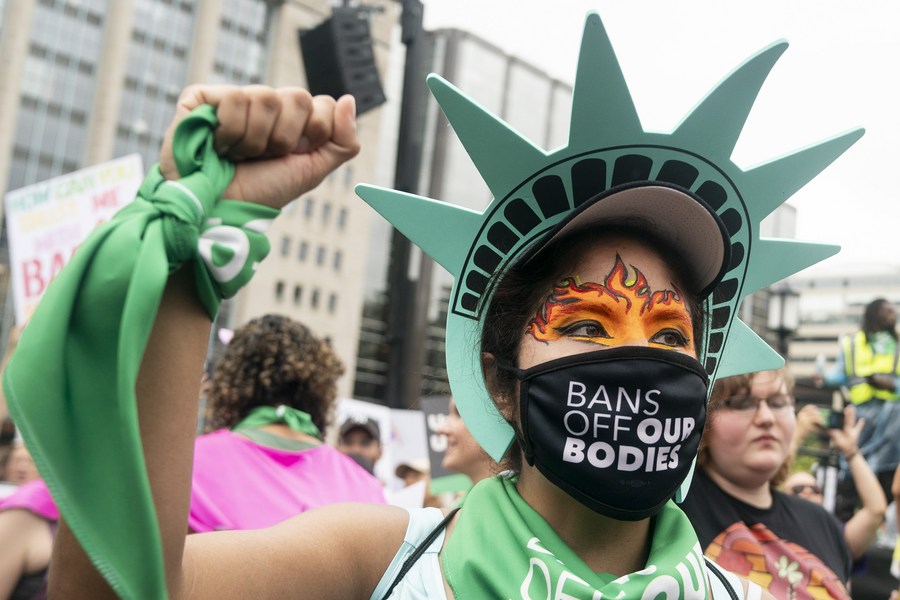 * Thousands of protesters came to Washington, DC, on Saturday to demand more action from the White House to protect abortion access, as the fight for abortion rights further divides America along lines ideological and partisan.

* Without Roe c. Wade, states are allowed to impose their own medical procedure legislation. More than a dozen states, whose legislatures are controlled by Republicans, have passed restrictive abortion laws or will see such legislation go into effect in the coming weeks.

* As women’s rights take a heavy hit this time around, America’s human rights hypocrisy and systemic flaws have once again been laid bare.

WASHINGTON, July 9 (Xinhua) — The United States continued to feel the heat from the Supreme Court’s explosive decision to overturn Roe v. Wade two weeks ago, which ended the constitutional protection of the right to abortion for women in the country.

Thousands of protesters came to Washington, DC, on Saturday to demand more action from the White House to protect abortion access, with the fight for abortion rights further dividing America along ideological lines and partisans.

Participants in the Women’s March under the theme “Summer of Rage” marched to Franklin Square northeast of the White House in the morning despite light rain. Most showed up with posters or banners advocating abortion rights and wore green bandanas with the slogan “ban our bodies”.

“Today we say to @POTUS and ALL of our elected leaders that we will not let politicians play games with our lives and our future,” the Women’s March tweeted, tagging US President Joe Biden. “We DEMAND our fundamental rights.”

“I’m taking part in this rally because I think it’s important that we women have a voice and a choice with our bodies,” Esther Torres, a protester from Austin, Texas, told Xinhua. “It’s a basic human right. Women decide what we do with our bodies.” 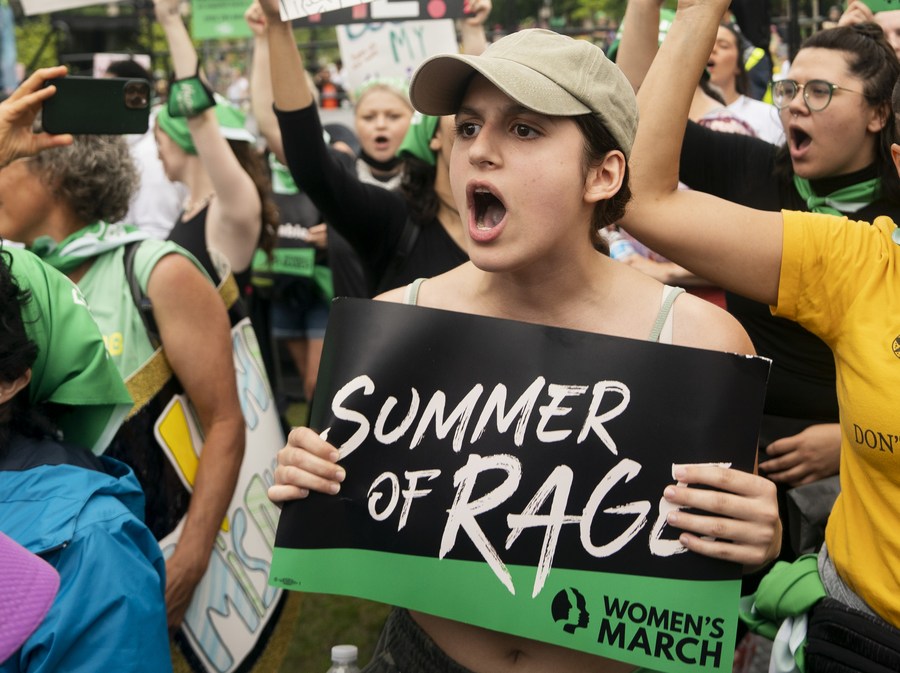 Protesters marched toward the White House at noon, chanting pro-choice slogans such as “my body my choice” in the streets before joining a sit-in outside the presidential residence and tying the bandanas on the north fence.

“We’re marching. We’re going to make some noise and make it clear that we’re human and we have a human right,” Torres said.

On June 24, the United States Supreme Court released the decision to overturn Roe v. Wade, nearly five decades after setting a precedent in 1973 that women have a constitutional right to abortion – arguably one of the most contentious issues across the country due to a clash between religious beliefs and individual freedom.

“Roe was horribly wrong from the start,” Judge Samuel Alito, a conservative, wrote in the majority opinion. “His reasoning was exceptionally weak, and the decision had adverse consequences.” The court’s three liberal justices dissented, lamenting that “several million American women” had lost fundamental constitutional protection.

The decision further divided America. Both Democrats and Liberals rushed to denounce the High Court ruling as they generally support abortion rights and argue that abortion is a woman’s choice. Republicans and conservatives who have long accused the procedure of taking the life of an unborn child have taken a victory lap.

A small group of anti-abortion activists gathered on a street corner in Franklin Square, holding banners expressing their position, one man using a megaphone to speak. The two camps of demonstrators challenged each other in tense exchanges in the presence of police and vehicles. 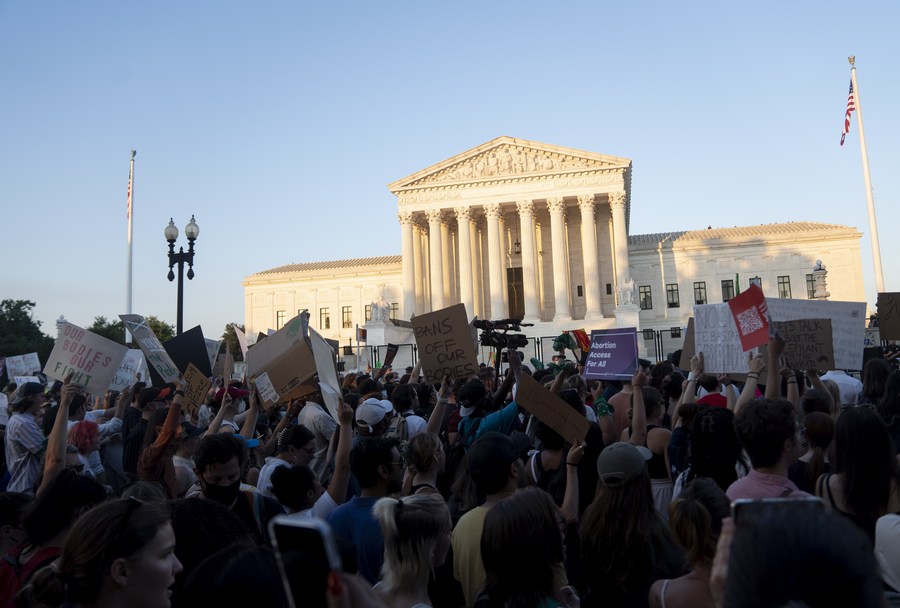 Without Roe c. Wade, states are allowed to impose their own medical procedure legislation. More than a dozen states, whose legislatures are controlled by Republicans, have passed restrictive abortion laws or will see such legislation go into effect in the coming weeks.

Kaylee White, who attends school in West Virginia, is considering transferring to another state where abortion is not criminalized.

“I don’t feel protected in my state, my rights, in particular. I don’t want to contribute to that,” she told Xinhua at the rally in Franklin Square.

Three days after the Supreme Court issued the ruling, Caitlan Bernard, an Indianapolis-based obstetrician-gynecologist, received a call from a “child abuse physician” in Ohio who had a 10-year-old patient at six weeks and three days pregnant, according to the Indianapolis Star.

Unable to obtain an abortion in Ohio, where any procedure after six weeks is prohibited, the young girl “was en route to Indiana to be treated by Bernard”, wrote the Star. Abortion is still legal in Indiana, but the conservative stronghold is set to pass the state’s own abortion law.

The story went viral on social media and sparked outrage. “It’s appalling that you’re forcing a 10-year-old – who’s been raped – to carry another child,” Torres replied. “Her body is not fully developed, yet you are going to force her to have a child. What world are we in?” 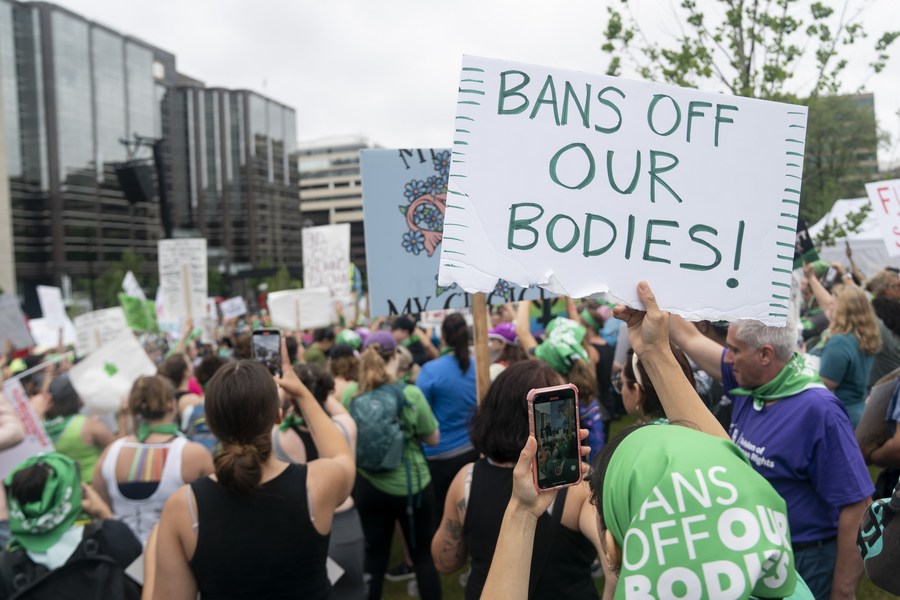 The American Civil Liberties Union Ohio branch tweeted that patients and victims in the state are “suffering in real time” and that the “six-week abortion ban is causing devastating long-lasting damage.” end to our communities. It’s absolutely tragic.”

On Friday, Biden also weighed in on the matter before signing an executive order on access to reproductive health services. “Ten years. Ten years. Raped, six weeks pregnant. Already traumatized. Was forced to travel to another state. Imagine being that little girl,” Biden said from the White House.

MEPs passed a resolution on Thursday condemning “once again the rollback of women’s rights and sexual and reproductive health and rights” in the United States and some European Union member states.

“The US Supreme Court’s decision to overturn abortion rights is a devastating development and an attack on the human rights of women everywhere,” said Swedish politician Helene Fritzon, Member of Parliament European Union and vice-president of the group of the Progressive Alliance of Socialists and Democrats. “It teaches us a lesson: the human rights of women and girls can never be taken for granted and we must always fight to defend them.”

The Supreme Court of the United States is the final court of appeal in the nation’s judicial system, with the power to review and overturn decisions of lower courts. He is usually the final interpreter of federal law, including the constitution. His decisions have profound consequences for American society and politics.

The High Court has come under increasing scrutiny in recent decades, particularly in recent years amid political polarization in Washington and across America. Questions surrounding its rulings and the independence of the tribunal dominated the news cycle.

Trust in the Supreme Court has declined sharply over the past year and hit a new low in Gallup’s nearly 50-year trend. Only 25% of American adults express “a lot” or “somewhat” confidence in the institution where the conservatives have a 6-3 advantage over the liberals on the nine-seat bench.

White also felt disappointed with the direction the country was taking, calling what happened with abortion rights “the tip of an iceberg.” 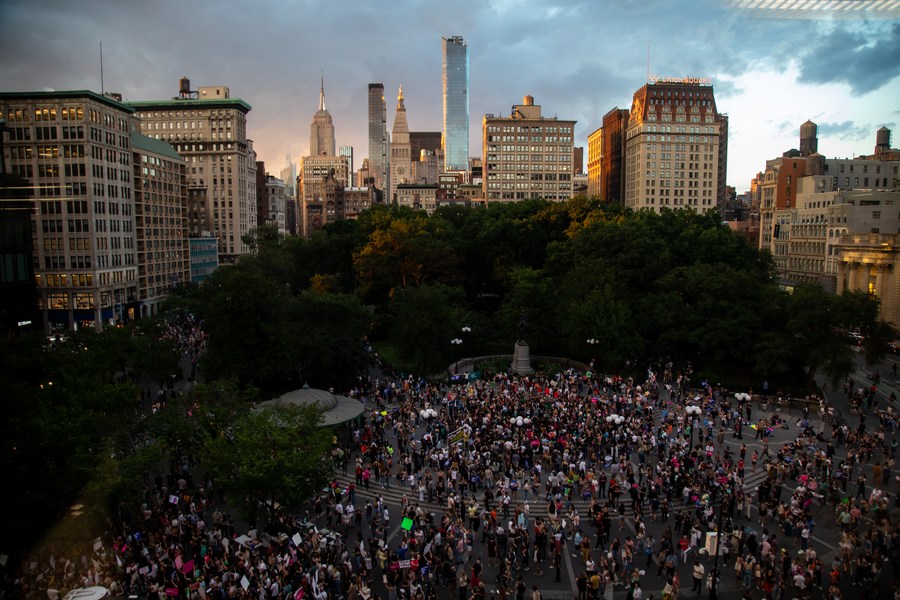 Protesters gather in Union Square during a protest after the U.S. Supreme Court ruled to overturn Roe v. Wade, in New York, the United States, on June 24, 2022. (Photo by Michael Nagle/Xinhua)

Democrats in the U.S. House of Representatives plan to vote next week on bills protecting access to abortion. But some Republican governors and anti-abortion groups are considering laws that would criminalize patients seeking out-of-state abortions. The bills face long odds in the evenly divided Senate as Democrats do not have enough support to cross the filibuster’s 60-vote threshold.

Biden acknowledged that his executive order alone could not guarantee abortion rights in states that decided to ban access and encouraged Democrats to vote in November’s midterm elections. “We need two more pro-choice senators and a pro-choice House to codify Roe as federal law. Your vote can make this a reality,” he said Friday.

Republicans, on the other hand, defended the conservative-leaning Supreme Court and its decision on Roe v. Wade and would consider a national anti-abortion bill if they win control of Congress later this year, with a 15-week ban. on the table.

2022-07-10
Previous Post: 3 plays about women’s rights debut next week at Brooklyn’s On Women festival
Next Post: Women’s rights activists call for protest against hijab amid crackdown