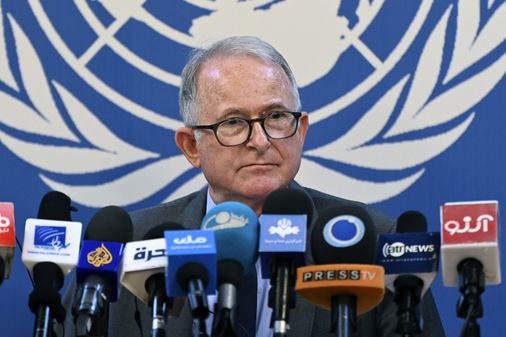 In recent weeks, they have issued decrees requiring women to cover their faces except their eyes, including TV presenters, and banning girls from school after sixth grade.

At the same time, Afghanistan has seen persistent shelling and other attacks on civilians, often targeting the predominantly Shia Muslim Hazara ethnic minority. Most of the attacks were claimed by the Islamic State group’s affiliate in the country, which is a bitter rival of the Taliban.

Bennett said the de facto Afghan authorities – referring to the Taliban – failed to recognize the scale and gravity of the abuses being committed, many in their name, and their responsibility to address them and protect the whole community. population.

“I have expressed serious concerns about the deterioration of human rights across the country, and the erasure of women from public life is particularly concerning,” Bennett told reporters. In a statement released at the same time, he called on the Taliban to “immediately reverse policies and guidelines that negatively impact women.”

Her comments follow a Tuesday statement by the UN Security Council that called on the Taliban to “quickly reverse” restrictions limiting girls’ access to education, women’s employment, freedom of movement and “full, equal and meaningful participation in public life”.

The new decrees brought the country closer to the harsh measures imposed by the Taliban when they first ruled Afghanistan from 1996 to 2001. At that time, they placed crushing restrictions on women, banning them from education and participation in public life, and forcing them to wear the universal burqa.

During his visit, Bennett held talks with Taliban leaders and traveled the country, meeting with civil society groups, rights activists and minority communities, including the Hazaras.

Speaking to the press, he called for investigations into the bombings targeting Hazaras, other Shia as well as Sufis, a mystical strand of Sunni and Shia Islam that activists call heretical.

Such attacks “are becoming more systematic and reflect elements of organizational policy”, he said, adding that they show “the characteristics of crimes against humanity”.

On Wednesday, at least 14 people were killed in a series of explosions. In one, a bomb ripped through a Kabul mosque where people were praying, killing five and injuring 22. In the northern city of Mazar-e Sharif, three minibuses were hit by bombs, killing nine people and injuring 15, all Shiites. The Islamic State group claimed responsibility for the bombings.

Bennett also pointed to “a high number” of reports of intimidation, harassment, attacks, arrests and, in some cases, killings or disappearances by authorities targeting journalists, prosecutors and judges, as well and civil society for exercising their rights to freedom of peaceful assembly and association. .

Bennett said the Taliban were at a crossroads, where either society would become more stable and a place where “every Afghan enjoys freedom and human rights – or it will become increasingly restricted.”

If the Taliban can meet the criteria, including fully opening schools for girls, establishing a more representative administration and allowing dialogue, he said, “the risks of instability and additional suffering in Afghanistan could be alleviated”.