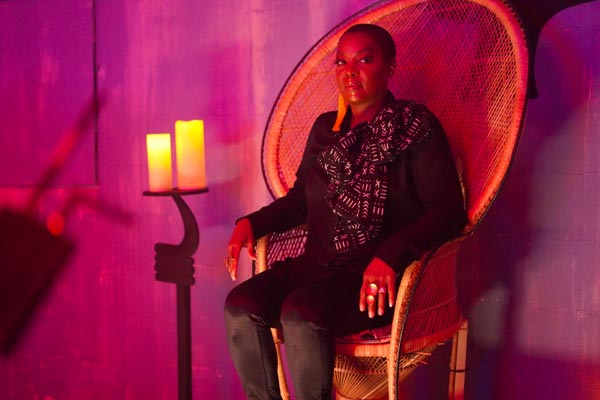 The panel discussion is the first in a series of three virtual events leading up to the premiere of the film “Black Terror,” this fall directed by WACO Theater Center co-artistic director Richard Lawson.

“WACO was created to celebrate black culture and art through engaging and empowering initiatives,” said Richard Lawson. “Live special events discuss freedom struggles of today and the past and raise important questions about what it means to be revolutionary.”

“We [Black women] were warriors, because we were always at war with the oppression around us and I’m very happy to come from a family of women who fought against that oppression,” Brown said.

Slated to premiere in fall 2022, “Black Terror” is a bicoastal adaptation of Richard Wesley’s classic 1971 play, and is a collaboration between Wesley, WACO Theater Center and Newark Symphony Hall. The production combines theater and film, weaving together the pulse of past and present liberation struggles. He invites the public to ask: What does being really mean to the people?

Advertise with New Jersey Stage for $50-$100 per month, click here for more info

* Elaine Browna former leader of the Black Panther Party as Minister of Information and President;

* Erin Michelle Washingtonthe founder of Soul Productions, a company that exposes urban communities to independent artists who are at the forefront of new approaches to music and theater;

* Marta Effinger Crichlow a playwright who has worked across the United States for over twenty years and whose work centers on the lives of black women and girls;

* Michele Morganan actress and NAACP Theater Award winner for her role in “Pearl,” and plays N’Zingha in the upcoming film adaptation of “Black Terror”;

* and Taylor Edwardsan actress born and raised in Dallas, Texas, in the upcoming film “Black Terror,” Edwards plays M’Balia, a strong, determined, and dedicated revolutionary who is willing to sacrifice everything she loves for the sake of the people of ‘here.

The panel will air on the WACO Theater Center website.

Located in the booming arts district of North Hollywood in Los Angeles, WACO Theater Center is one of the few cultural institutions in Los Angeles dedicated to the contemporary visual and performing arts of the African Diaspora. Driven by the mantra “Where Art Can Happen”, WACO is dedicated to empowering artists within a diverse base of its LA communities and beyond. WACO is dedicated to giving emerging and established artists of African descent a platform and voice to use their creativity, to connect and inspire individuals and communities across the African diaspora.

Born in 1925, Newark Symphony Hall (NSH) has been home to nearly a century of arts and culture in what is now one of New Jersey’s oldest and largest venues for arts and entertainment. NSH remains more committed than ever to providing a rich artistic experience for art lovers of all ages, while creating career paths for people of color everywhere – and improving both its community and the Greater Newark.

Yendor theater company, co-founded in 2016 by Rodney Gilbert and Andrew Binger, develops, produces and celebrates the works of historically resilient black and brown writers, writers from the LGBTQ+ community. Their work explores difficult themes such as police brutality, mental illness, and racism, while celebrating beautiful themes like forbidden love, community building, and faith.

Advertise with New Jersey Stage for $50-$100 per month, click here for more info