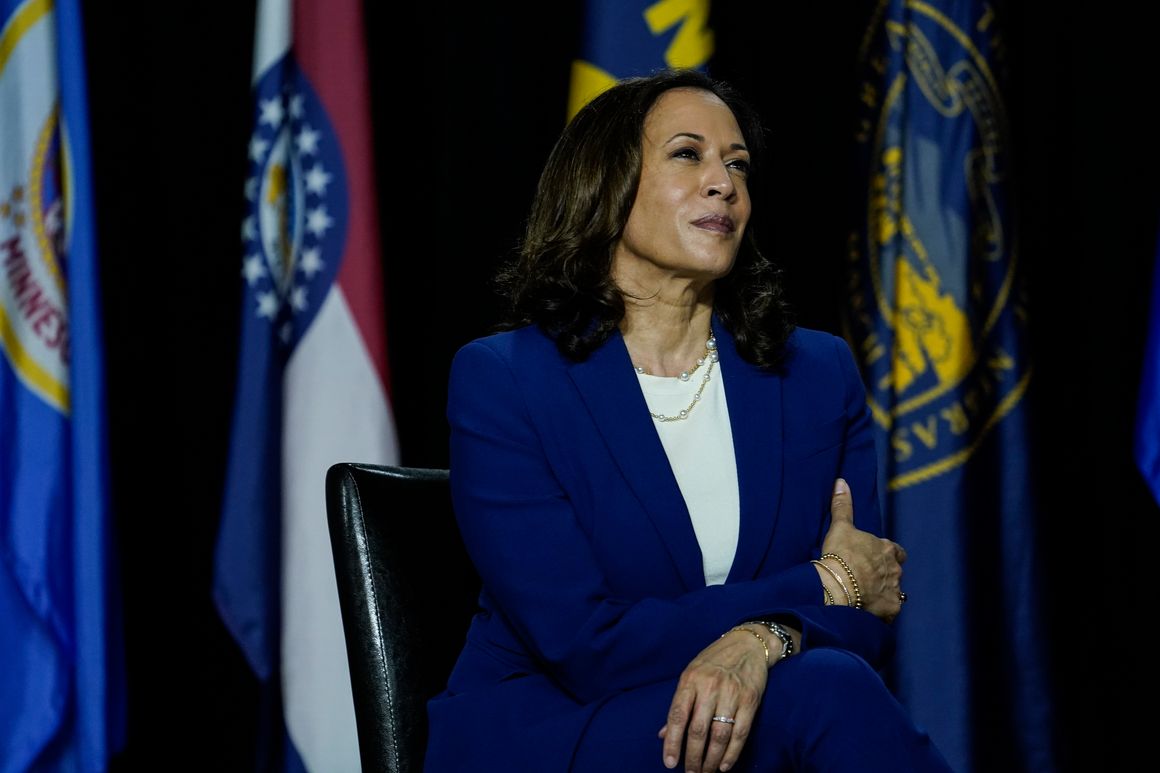 Joe Biden’s choice of Senator Kamala Harris as his running mate is rightly heralded as a historic moment for black women. For the first time, a black woman is the presumptive candidate for a big party ticket. This time is coming 100 years after women won the right to vote with the passage and ratification of the 19th Amendment in 1920 and 55 years after the Voting Rights Act guaranteed the ability of black people to exercise their right to vote.

Harris’s rise reflects his own long list of qualifications – San Francisco district attorney; California’s first African American and first female attorney general; second African-American woman and first South Asian American in the United States Senate. But her rise — accelerated in part by nationwide protests this summer that likely factored into Biden’s decision — also has deep historical roots in the vast record of black women’s political activism in the United States. For example, Harris’ nomination comes more than six decades after Charlotta Bass made history as the first black woman to run as a running mate in 1952. Joining the Progressive Party ticket, Bass defended social and economic justice. Black women have always operated at the intersections of gender, race, class, sexuality and ability. Likewise, black women have historically fought on many fronts, from abolitionism and suffrage to equal rights and civil rights.

Even before the abolition of slavery, black women played vital roles in social justice movements. Enslaved women led labor strikes that shut down plantation operations for weeks, went to court and demanded their freedom and won, and dressed as men and went to war in the name of freedom. Abolitionists like Sojourner Truth, Henrietta Purvis, Harriet Forten Purvis, and Sarah Parker Remond were avowed suffragettes who passionately defended women’s suffrage. After the Civil War, masses of black women organized nationwide suffrage campaigns in cities as large as Tuskegee, Alabama; Saint Louis; Los Angeles; Boston; New York and Charleston, South Carolina.

On Wednesday, Harris will address his party’s virtual convention from Wilmington, Delaware (Biden’s hometown) and formally accept a nomination that cements his place in history. But coming this far, Harris is also heir to a deep and underappreciated legacy of American political life: the black women who, over the past century, have fought to claim their fair share of political power. American, and the black women voters who were key to keeping those gains. Their story also offers a glimpse of the kind of pushback Harris will face (and has faced before) from people who still aren’t comfortable seeing black women in positions of power. It’s something former first lady Michelle Obama addressed in her remarks on the opening night of the Democratic National Convention: “Now I understand that my message will not be heard by some people. We live in a deeply divided nation and I am a black woman speaking at the Democratic Convention. She acknowledged that her presence as a woman of color shapes how some people see her. But black women persist.

As early as 1918, Alice Sampson Presto, who had worked as a secretary for the Seattle branch of the NAACP, was the first black woman to run for a seat in a state legislature. Even then, Presto had a progressive and arguably feminist platform. She campaigned on equal pay regardless of gender; she advocated an increase in the cost of living for widows’ pensions; and she believed that the children of taxpayers should not have to pay tuition in public institutions. Although Presto lost, she broke new ground in engaging black women in the electoral process. And these efforts have met with fierce resistance.

After 1920, black women redoubled their efforts with renewed vigor. As white supremacists worked tirelessly to suppress the black vote, black women worked just as hard to make sure their votes counted. Black women organized voter registration drives everywhere they could, including in states like California, New York, New Jersey, Illinois, Kansas and Colorado. Yet in large parts of the South, white supremacists have used violence, racial tyranny and things like poll taxes to deprive masses of black voters. In response to the conditions, black women, through the National Association of Colored Women and the NAACP, provided information and testimony in 1920, in support of legislation proposed by Massachusetts Rep. George Holden Tinkham. The Tinkham Bill sought to expose the systematic repression of black voters in the South by forcing states to use the actual number of votes cast rather than population as the basis for redistribution in Congress. Unsurprisingly, the bill was defeated, but that hasn’t stopped black women from continuing to organize against voter suppression.

Shortly thereafter, black women formed the National League of Colored Republican Women (NLRCW), with the forceful motto, “We are in politics to stay and we will stay in politics.” Renowned black educator Nannie Helen Burroughs served as president and prominent black activist Mary Church Terrell was treasurer. Together they briefed voters on the candidates and also went around reassuring the more devout within their ranks that voting did not interfere with Christian values. Burroughs in particular has toured with candidates, visited black churches and played a vital role in raising funds for the upcoming election. The NLRCW tried to use the concentration of black women in the Republican Party (then still considered Lincoln’s party) as an electoral bloc, but they would end up frustrated by the general lack of recognition of their party loyalty. Increasingly, black women have distanced themselves from the Republican Party, which has remained inactive on civil rights.

By the 1930s, the NLRCW had dissolved and more and more black voters were gravitating towards the Democratic Party. It also helped first lady Eleanor Roosevelt to be pro-civil rights and have a relationship with Mary McLeod Bethune, who among her many accomplishments established the National Council of Negro Women in 1935. Bethune later became director of the Black Division of the National Youth. Administration, becoming the first black woman to lead a federal agency. Additionally, where Alice Presto failed, Shirley Chisholm not only managed to become the first black woman elected to Congress in the late 60s, but she was also the first black woman to run for president in 1972. .

Black female political activists have made significant political interventions to address the needs of the poor and working class, and otherwise disadvantaged. For example, in 1966, Barbara Jordan became the first black woman elected to the House of Representatives from the Deep South where she held the nation to its principles at every opportunity. Like women before her, she has always cared about the poor, so it’s no surprise that she used her role as a Texas state legislator to help pass the Texas minimum wage law. state and was instrumental in the creation of the Texas Fair Employment Commission. She also spoke forcefully at the opening of President Richard Nixon’s impeachment hearing when she said, “I’m not going to sit here and be an idle spectator of the diminishment, the subversion, the destruction of the Constitution.” Like Jordan’s commanding remarks nearly 50 years ago, Kamala Harris also took part in an impeachment hearing of a sitting president. A week before that hearing, Harris made the following remarks:

“I speak to you today fully aware that I stand on the shoulders of those who have gone before me in our nation’s ongoing struggle for equality. I speak because I was raised by people who have spent most of their lives demanding justice in the face of racism, misogyny, bigotry and inequality. I speak because I have dedicated my entire career to upholding the rule of law and bringing integrity to our justice system.

Harris began by acknowledging the activists in front of her. But as we’ve learned in previous movements, everyday black women are also facilitating meaningful change. Women like Sandra Bundy, a corrections worker who in 1977 set the legal framework for combating sexual harassment in the workplace when she successfully sued the Washington, DC, Department of Corrections. Although she initially lost the case, Bundy appealed and remained in court for five years, taking the case all the way to the Supreme Court where she was victorious. A single working mother, Bundy had been regularly harassed and offered as an employee. Her federal lawsuit helped establish sexual harassment as an unacceptable form of gender discrimination and paved the way for Anita Hill decades later, and the women of the #MeToo movement today.

Yet, even as black women have been at the forefront of political and social activism, many have found themselves under harsh criticism from inside and outside the black community. Chisholm was marginalized by the media, her campaign materials were routinely vandalized, she was criticized for allegedly taking power away from black men, and she was nearly attacked by a knife-wielding maniac. Navigating racism and restrictive gender codes could indeed be treacherous ground, a difficulty that has clearly endured. Today, as we celebrate the centennial of women’s suffrage, we witness how elected women such as Harris and Representatives Karen Bass, Val Demings, Maxine Waters and Barbara Lee exist on a historical continuum with their black precursors. They too have been the subject of severe criticism, proof of the little change.

Black elected women continue to be denigrated, not for their political positions or their legislative actions, but rather for being supposedly “too ambitious” and formidable or angry. They are also regularly the subject of racist insults about their physical appearance. Moreover, despite the historic and ongoing high voter turnout of black women – largely in favor of the Democratic Party – black women as a group remain among those least served by the electoral process. The record number of black women in political office is encouraging, but it is clear that, like their predecessors, black politicians, activists and ordinary citizens must remain vigilant in their efforts to fend off voter repression, end the police brutality and seeking justice in cases like Breonna Taylor’s, as well as continuing to fight for quality health care, housing and education for all black women.