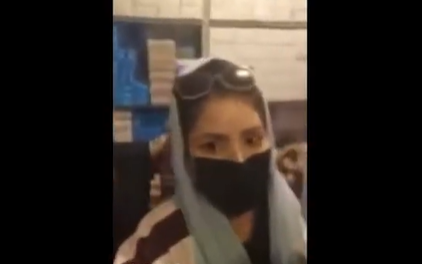 KABUL, Afghanistan (KFOR/Storyful) – The Taliban in Afghanistan say all women must stay at home unless they are forced to leave their homes out of necessity. So when a women’s rights group demonstrated in the streets of Kabul, they were met with heavy gunfire.

The August 13 protest led to Taliban members hit a journalist and the detention of journalists and participants. Others ran for their lives after the Taliban fired several automatic shells into the sky.

According to TOLO News and the Pajhwok news agency, women were chanting: “Bread, work and freedom!”

Hoda Khamosh is a leading women’s rights activist in Afghanistan and captured the video above. “He shot at us. They are shooting at us,” one woman said.

August 15 marks the one-year anniversary of the Taliban’s return to power in Afghanistan, and the group continues to deny Afghan women and girls the few rights they currently have.

Six weeks ago, the Taliban decided to postpone the secondary education of Afghan girls, which was denounced internationally.

Women are now required to cover their faces in public and only leave their homes when necessary. Any violation will result in the punishment of their male relatives.