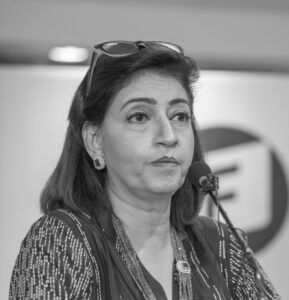 Regression of women’s rights in Afghanistan

Afghanistan is a deeply patriarchal and conservative society. Women largely dress very conventionally, and even young girls wear the hijab. However, Afghan women under Taliban 2.0 again face repression and marginalization, aimed at reversing the visibility, freedom and empowerment that Afghan women have gained for themselves. Many women fear a return to the enforced invisibility they suffered for five years between 1996 and 2001 under Taliban 1.0.

The so-called Taliban 2.0 imposes new restrictions every two days. As early as December 2021, the Ministry for the Promotion of Virtue and the Prevention of Vice issued a directive, which called on vehicle owners to refuse to drive women not wearing headscarves. Taliban authorities had ordered that women seeking to travel long distances should not be allowed to travel by road unaccompanied. This had drawn condemnation from human rights activists.

The story where the new Taliban administration announced the closure of girls’ high schools, hours after they reopened for the first time in nearly seven months in March 2022, has created an uproar. As reported on May 6, the Taliban said Muslim clerics will meet to decide whether to reopen schools for girls beyond sixth grade as pressure mounts on them to allow secondary education for girls in Afghanistan. .

The situation on the ground is not good. “The requirements for the hijab are getting stricter and stricter,” one teacher said of the mandatory Muslim headscarf. “They have spies to record and report… If students or teachers don’t follow strict hijab rules, without any discussion, they fire teachers and expel students. She shared a photo of her school’s assembly; the students and teachers all wore uniforms showing only their eyes.

It’s not just education, they also target the mobility of independent women. Taliban officials in Afghanistan’s most progressive city have told driving instructors to stop issuing licenses to women. “We have received verbal instructions to stop issuing licenses to female drivers…but not to prevent women from driving in the city,” said Jan Agha Achakzai, director of the Herat Traffic Management Institute. .

The Taliban has largely refrained from issuing national written decrees, instead allowing local authorities to issue their own decrees, sometimes verbally. Naim al-Haq Haqqani, who heads the provincial Department of Information and Culture, said no official order had been given.

This is also changing. Taliban leader Haibatullah Akhunzada has issued a harsh decree through the Ministry for the Promotion of Virtue and Prevention of Vice criminalizing women’s dress code. According to her statement, Afghan women “should wear a chadori (burqa from head to toe) because it is traditional and respectful”. The new regime imposed criminal penalties for violations of the women’s dress code. The statement identified the chadori (the blue colored burka or full veil) as the “best hijab” of choice.

It is one of the toughest restrictions imposed on Afghan women since the Taliban took power last year. Punishment mechanisms are also reminiscent of the past, where male guardians of female offenders would be held accountable and punished. “If a woman is caught without a hijab, her mahram (a male guardian) will be notified. The second time, the tutor will be summoned [by Taliban officials], and after repeated summons, his guardian will be imprisoned for three days,” the statement said. Akif Muhajir, a spokesperson for the ministry, said government employees who break the hijab rule will be fired. When announcing the latest decree, a cleric said the Taliban could never be pressured by the West to compromise on their beliefs. For Afghan women who have spent years struggling to make fragile progress in the country, it feels like two decades of achievements are being undone.

Since taking control of Afghanistan, the Taliban have reintroduced draconian restrictions on the freedoms and movement of women reminiscent of their last rule in the 1990s. Women in Afghanistan, despite living in the shadow of war and conflict, have made considerable progress. They had acquired both a voice and visibility in the media, in universities and in the workplace. But now they face imminent risk of losing those gains under the current Taliban administration. All their fears have come true. The Taliban went back on their word. They had promised inclusiveness and claimed their restrictions on women working and girls studying were ‘temporary’ and only in place to ensure all workplaces and learning environments were safe for them. It sounded wrong then, it is wrong today. New laws and restrictions surface every other day and have a direct impact on women.

Afghanistan was ranked as one of the worst countries in the world for women even before the Taliban took over. Women’s issues in Afghanistan have remained largely under-addressed or unaddressed, but under the Taliban regression is not only feared, it is happening.

The United States may be defending women’s rights in Afghanistan today, but back when the negotiations with the Taliban were taking shape, it was a bit evasive on the issue of Afghan women. Among the many unresolved issues was the concern for women’s rights and human rights, which were not even mentioned in the text of the US-Taliban peace agreement. Civil society representatives were also conspicuous by their absence from the talks. What happens is the culmination of this. The hasty exit of the United States from Afghanistan haunts Afghan women the most.

The gains made over the past 20 years since the fall of the last Taliban regime are largely due to pressure from the international community. International experts had a significant influence in the creation of the Afghan constitution. The Afghan government has used women’s rights and gender equality to appease donors. Afghan women, even then, did not trust their own government to fully protect them.

Afghan women are fighting back, taking to the streets and demonstrating, even in the face of Taliban violence amid attempts to ban protests. The Taliban are no longer a resistance force; the art of governing requires pragmatism. The Afghans who let them through to oust the foreign occupiers may rise up against them, this will open the door for those waiting on the sidelines to return desperately wanting the Taliban to fail.

It’s not the 90s, the world has changed. The Taliban must react to the development of the situation. The facilitated capture of power was relatively easy, maintaining control is another story. They must deliver, generate goodwill, prevent economic implosion, and respond to new realities on the ground, including the demands of the empowered women of Afghanistan. It is hoped that this will not only be done to appease the international community and donors like past governments, but for the women of Afghanistan. They must be granted their rights both in form and substance if the Taliban seeks to become a civilized member of the international community. Above all the right to education and the right to work. Islam denies neither.

The author is Associate Professor of Social Sciences and Liberal Arts, IBA Karachi