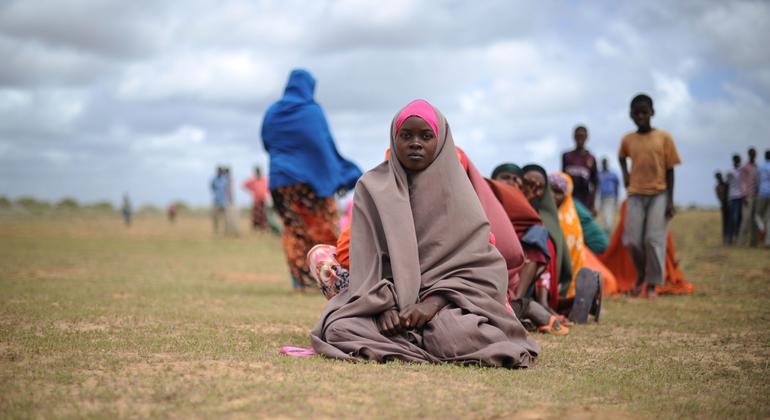 Putting women’s rights “at the forefront” of climate policies: Bachelet |

“While I welcome international attention on the impact of climate change on women and girls over the past decade, we also need to focus urgently on the serious problem of violence against them which was exacerbated by the climate crisisshe told the UN Human Rights Council in Geneva.

Countries discuss the issue as part of the Council’s annual one-day debate on women’s rights.

“Get out of the rhetoric”

Ms. Bachelet explained how the climate crisis puts the lives of women at risk, whether they are fleeing disasters or speaking out against the global emergency. She underscored the critical need for greater action.

“I recognize the need for further discussion, assessment and analysis on these issues. But unless we move from rhetoric to concrete action – immediately – the lives, safety and dignity of millions of women and girls will continue to be at stake,” she said.

Women make up 80% of those uprooted by climate change, she said, citing the United Nations Environment Program (UNEP). Displacement puts them at a much higher risk of violence, including sexual violence.

“While they sleep, wash, bathe or dress in emergency shelters, tents or camps, the risk of sexual violence is a tragic reality of their lives as migrants or refugees. Added to this is the heightened danger of human trafficking and child, early and forced marriage that women and girls on the move endure,” she said.

The High Commissioner listed examples where this happened, such as after Hurricane Katrina, the destructive and deadly storm that hit parts of the southern United States in 2005, particularly the city of New Orleans. .

The rate of rape among women moved to trailer parks increased nearly 54 times the benchmark rate in the state of Mississippi that year. Nepal also witnessed a fourfold increase in traffic after the 2015 earthquake.

Berta Caceres, an environmental activist from Honduras, was murdered in March 2016. She was posthumously recognized as a United Nations Champion of the Earth winner for her tireless campaign for the rights of indigenous peoples.

Meanwhile, thousands of women around the world are also speaking out to fight climate change. These environmental rights defenders, who work to protect land, water, nature and communities, do at great personal risk.

“They are criminalized and silenced. They are threatened and stigmatized. They are at additional risk of gender-based violence. And many are even killed,” Ms. Bachelet said.

She reported that in Mexico and Central America, nearly 1,700 acts of violence were recorded against women environmental rights defenders between 2016 and 2019.

Ms Bachelet called for putting the rights of women and girls “front and center” in climate change policies.

She outlined five steps countries can take, start by recognizing that climate change and violence against women are linked.

Women must also be fully involved in climate decision-making, as their insights, lived experience and advice will lead to both better rights protection and more effective climate action.

Governments will also need to strengthen their gender-sensitive environmental and disaster risk reduction policies and programs.

“This will involve ensuring women’s leadership in disaster risk management, providing sufficient financial resources and establishing effective monitoring mechanisms,” she said. “And that will mean ensuring that in the event of a disaster, women have access to health care, sexual and reproductive health, support services, shelter and safety.”

UN rights chief urged countries to strengthen accountability as ‘there must be zero impunity for perpetrators of gender-based violence, be they spouses, family members, religious leaders, workers humanitarian workers or government officials”.

Environmental activists and founders of Youth for Climate Argentina.

Finally, governments must take urgent action to respect, protect and fulfill their human rights obligations to women and girls, and in particular to environmental activists.

“This includes ensuring their rights to freedom of expression, assembly, association and participation in decision-making at all levels,” she said, adding “and they must also provide women reparation and accountability for the threats and harms they endure”.

2022-06-27
Previous Post: Kendrick Lamar sings for women’s rights on the Glastonbury set
Next Post: Pioneer of the women’s movement in Samoa