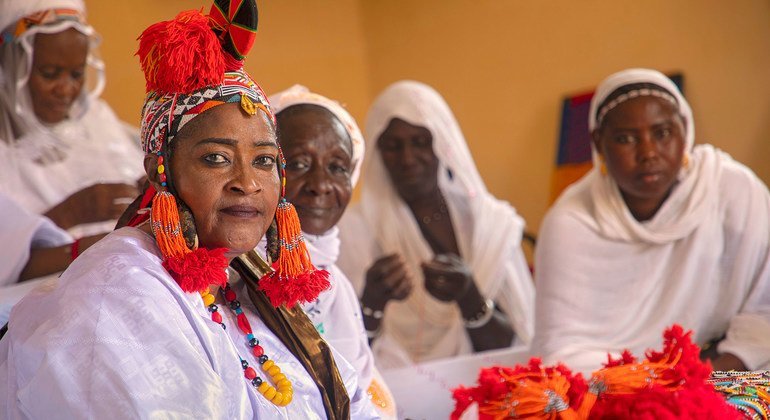 Promoting women’s rights, a “tested” strategy for peace and stability |

“A question of power”

Although gender equality paves the way for lasting peace and conflict prevention, the UN chief observed that “we are going in the opposite direction”.

“Today’s conflicts amplify gender inequality, poverty, climate disruption and other forms of inequality,” he said, adding that women and girls are disproportionately affected. by the violence and the impacts of these cascading crises.

Millions of girls are out of school, with no prospect of financial independence, while increasing numbers of women and girls experience violence at home.

Extremists and military leaders who seize power by force, do not respect gender equality and persecute women.

“Misogyny and authoritarianism are mutually reinforcing and antithetical to stable and prosperous societies,” he said, recalling that “women’s equality is about power.”

In West and Central Africa, the UN is working with regional organizations on women, peace and security to ensure that women are involved in early warning and mediation, including in Côte d’Ivoire. ‘Ivory (pictured).

The patriarchy continues to fail

Political impasses and entrenched conflicts continue to highlight examples of persistent power imbalances, such as in Afghanistan, Myanmar, Mali and Sudan.

And more recently, the Russian invasion of Ukraine has forced millions of women and children to flee for their lives, “exposing them to the risk of trafficking and exploitation of all kinds”, he said. declared.

“In all these conflicts, we have men in power and women excluded, their rights and freedoms deliberately targeted,” the Secretary-General stressed.

When conflict erupts, neighboring countries and regional organizations can make a significant difference.

In this regard, Mr. Guterres expressed his appreciation for the UN’s collaboration with the European Union, the African Union (AU), the League of Arab States and the Organization for Security and Cooperation in Europe ( OSCE) – all of whom took part in Wednesday’s debate.

He gave the example of the UN-AU and Intergovernmental Authority on Development (IGAD) partnership in Sudan, to bring the political process back to an agreed and legitimate constitutional order, aimed at ensuring that at least 40% of participants are women. . .

The Secretary-General urged regional organizations to strengthen their engagement with this group for the sake of Sudan’s future.

The UN supports women peacebuilders and civil society organizations through its political and peacebuilding missions around the world, including supporting survivors of sexual violence and investing in partnerships with local women leaders and peacemakers, and increasing the number of women at all levels.

“Supporting survivors of sexual violence as well as women peacemakers and activists is essential,” he said. “Evidence is mounting year after year that ensuring women’s rights, including their right to equal participation at all levels, is essential to building and sustaining peace.”

Notwithstanding the evidence, “the Women, Peace and Security agenda continues to be challenged and even reversed around the world,” acknowledged the UN chief, urging ambassadors and all member states to reflect on the fact that, despite consistent agreement on the value of women at the peace table, “there is still a huge gap in their participation and in the implementation of promises made for their protection, human rights and dignity”.

“I encourage you to commit to increasing support for women’s civil society, conflict prevention and peacebuilding work,” he concluded.

UN Women official Sima Bahous highlighted the impact of the conflict on women and girls, from disruption of education to early forced marriage, sexual and gender-based violence, food insecurity and poverty. lack of means of subsistence as well as access to housing, sanitation, and dignity.

Around the world, women are leading peace movements, but remain largely excluded from political processes and negotiations.

“It sets us back decades,” she said.

And yet, even as women face threats to their bodies and their safety, they risk their lives more as leaders of their communities, as heads of households, as peacemakers and mediators. .

She reminded the Council of their agreements through Security Council Resolution 1325 to protect women and girls in conflict and ensure that women are at the forefront of finding peace.

She added that many Member States have also made national commitments, as have regional organizations.

“Regional organizations have also played a key role in developing networks of women mediators,” she said, adding that almost every region and sub-region had at least one.

However, with all these institutional advances, almost every time there are political negotiations, peace talks, we ask ourselves: “Where are the women?

“The reason is simply that we have not honored our commitments,” Ms. Bahous said.

Women must be equally involved “in the search for peaceful solutions, recovery and preventive mechanisms”, she argued.

The head of UN Women urged the Council, Member States and regional organizations to ensure that all response efforts fully include the voices of women leaders.

“Make sure the women are there. In their own right. With their own lived experiences. Their own knowledge and vision of their future,” she stressed.

“The peace and security we aspire to will only be possible when women play a central role,” she added.

2022-06-15
Previous Post: In Mexico, the government’s rhetoric on women’s rights is better than what women experience on a daily basis | D+C
Next Post: Bristol: Women’s rights activists ‘silenced’ by balaclava-wearing trans rights crowd