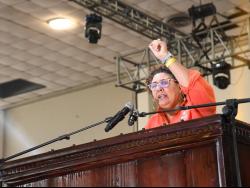 President of the People’s National Party (PNP) women’s movement, Patricia Duncan Sutherland, lamented what she says is the serious problem of inequality in Jamaican society, noting that black people have the fewest opportunities in the country.

Speaking at the PNP’s 84th annual conference at the National Arena earlier today, Duncan Sutherland said it was “not nice for all of us right now”.

“Equality in Jamaica comes from three things. Whites and browns have better opportunities than blacks,” she said.

Regarding class, she said people who have money and a particular background get better treatment and opportunities than those who don’t.

Moving on to gender, she said that men are treated better than women.

Duncan Sutherland said the party chairman was committed to righting wrongs in the country and the PNP must continue its work of social transformation.

Earlier today, PNP General Secretary Dr Dayton Campbell announced that the party had voted overwhelmingly to accept a resolution on universal suffrage within the party.

Another resolution to allow Jamaicans living in the Diaspora to become members of the party was also passed on Saturday during the private session of the PNP.

Former party leader Peter Phillips was greeted with thunderous applause and the blast of vuvuzelas.

Party leader Mark Golding, who is attending his first conference as PNP chairman, was also greeted with deafening cheers and fireworks.