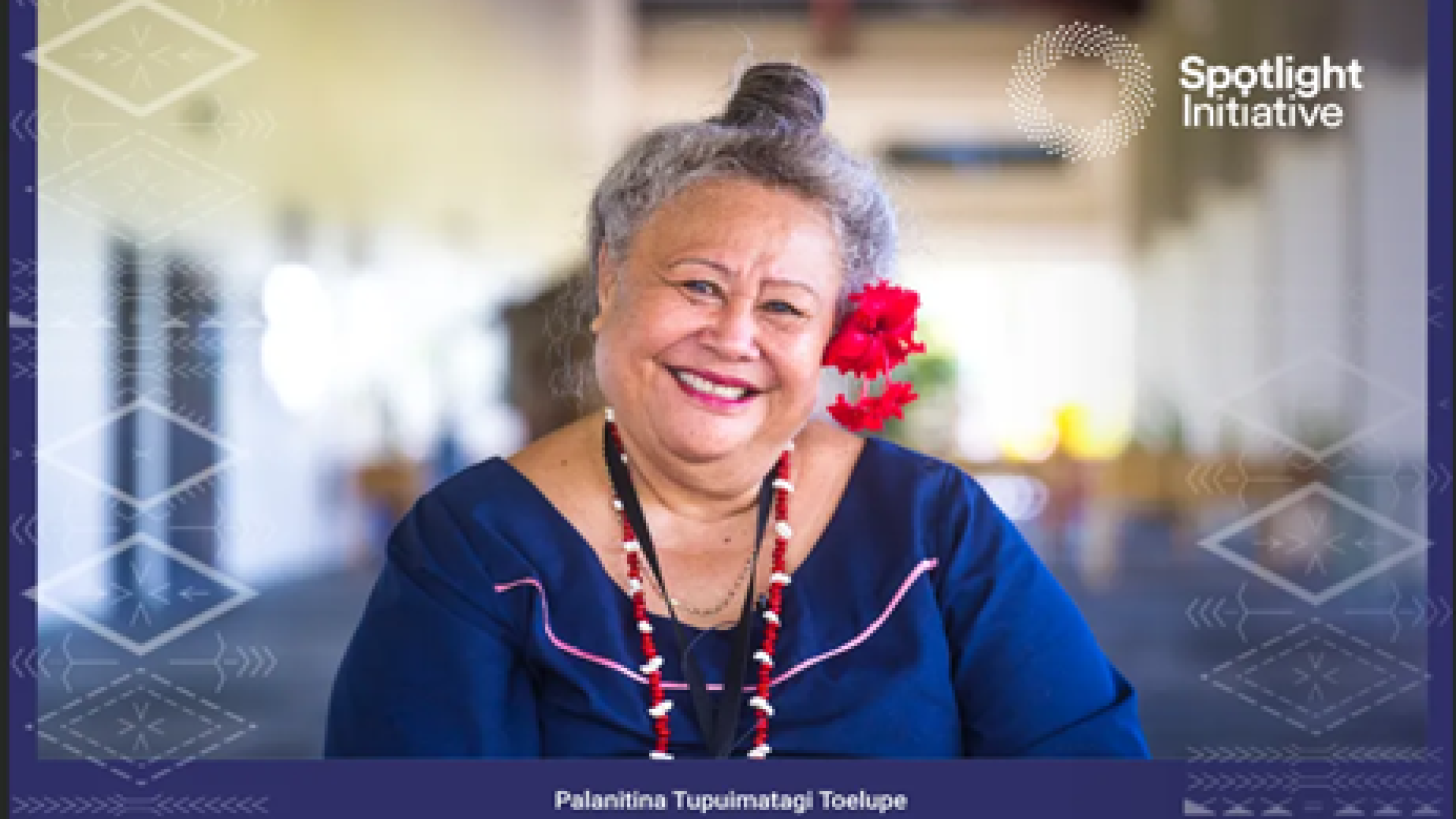 Pioneer of the women’s movement in Samoa

She is a legend of the women’s movement in Samoa, an influential member of the Vailele Council of Women and a proud mother of two. She is a former Deputy Director General of the Programs, Training and Community Development Division of the former Ministry of Women’s Affairs. Palanitina Tupuimatagi Toelupe, at the national and community level, has been a pioneer in the domestication of the Convention on the Elimination of All Forms of Discrimination against Women (CEDAW) and the Convention on the Rights of the Child ( CRC). She continued to serve in the same senior management position for the newly created Women’s Division within the revamped Ministry of Women, Community and Social Development. She then joined the Ministry of Health to take up the position of Director General, then Director General of National Health Services. Palanitina is Deacon of the Vailele Congregational Christian Church of Samoa, Board Director of the Land Transport Authority, and continues to shape women’s development in Samoa as a technical consultant, under which falls her recent work on “Contextualizing” the Initiative’s Gender Budgeting Spotlight Initiative.

The gender equality pioneer shared with UNDP how her partnership with UNDP through the joint European Union and United Nations Spotlight initiative has impacted the work of the women’s movement in Samoa.

Reflecting on the experience that has been and is particular to her work with the National Council of Women of Samoa (NCW), Palanitina said: “I am their technical adviser, I am responsible for ensuring that programs are developed and implemented, as well as ensuring that the programs improve and advance the capacity of women, not only traditionally but also technically.

Palanitina’s involvement with NCW is a natural progression. In fact, she sees it more as a vocation: “Our grandmothers and our mothers were part of this movement, so naturally we would be too. The NCW is Samoa’s oldest non-governmental women’s movement. In 2015, I was recruited to design and support the implementation of CNF’s institutional relaunch, with a constitutional focus on local governance by advancing women’s leadership skills in political and public life. The institutional strengthening initiative focused on women board members. In the same year, NCW received financial support to implement a grassroots advocacy campaign in 40 villages in Samoa to prevent violence against women and children. I have been tasked with integrating the two agendas, building women’s leadership capacity and through good governance they will be able to advocate for the protection of women from all forms of violence. These leadership characteristics relate to women’s traditional roles as village daughters, wives of great chiefs and orators, and wives of untitled men. These gender roles are integral to local governance and the development of their families and villages.

It is envisaged that empowering women with leadership skills through family and village welfare activities, for example, is the pathway to improving women’s lives. This has been the approach of technical consistency and integration with the programs with which I have been fortunate enough to support NCW. NCW is also privileged to have received support from AusAID and the EU and UN Spotlight Initiative to End Violence Against Women through UNDP and UN Women .

Palanitina sees her role as a technical assistant as essential in ensuring that links are made and that all these projects are integrated.

“With the Samoa Spotlight initiative through UNDP, the assistance has been quite significant. We have been able to train 10 NCW women from seven villages in Savaii and 10 NCW members from eight villages in Upolu. of 300 women. The trainings incorporated concepts of transformational leadership with the principles of Spotlight: leave no one behind, do no harm, gender transformation, informed by the local context and ensuring that through village women they can identify women who have gone through the gaps.

We explained the purpose and results of Spotlight and stressed that it was not only about preventing domestic violence, but also being able to target and identify those who needed it most. It was extremely important that the language and content of the training be unpacked and adapted to women in the community, otherwise it is easy to get cross-cutting overlapping issues, then the application becomes difficult.

Naturally, in the village setting, it is the older generation of women who attend the training. A strategic appeal was made to women’s councils indicating that it was mandatory for participants to have a young woman and an untitled married woman in the village (nofotan). Thanks to the training of the 10 women from each village, we were then able to pair them up after the training, with the older women from the initial training and the younger ones having come for the first time. There were five pairs in each village, and they were tasked with doing five informal conversations on all issues related to domestic violence, whether it be alcohol use, family harmony, family dynamics, relationships or poverty, they were encouraged to talk about it. The women were tasked with leading conversations focused on primary prevention. The important thing was to remind women that they are not qualified trained specialists, but they were qualified mothers. And their conversations had to be from a maternal approach, or a woman approach or a sister approach.

It was important that with all of our Spotlight chants nationally, we reached the nofotane woman (married woman living with her husband), disabled woman or fa’afatama femme (woman who identifies as a man) and whom the villages know.

The results of women’s advocacy in their own villages sparked conversations and what came out of sharing them with me was that the women came up with a lot of issues that would not have been addressed had they been invited to attend a forum, symposium, training, or national conference. People were starting to warm up to the idea of ​​having someone to talk to. And they were starting to talk about the differences they had as couples, the issues they had with the kids, the kids saying the parents had their expectations too high, and the issues of the kids not wanting to go to church, and didn’t believe in the church, which helped them at all. Somehow, the conversations achieved the goal we had intended; what we wanted to do was bring women back to the basics and start again from the basics, even if the main thing involves having difficult conversations. The foundations are community conversations focused on primary and primordial prevention. What is good continues to be good and what is bad they can do something about it.

Women were encouraged to use their roles as village daughters and wives of paramount chiefs and orators to continue to have a say, as this is the pathway to village governance. It was also strategic to involve the village representatives (Sui Tamaitai or the Nu’u), because she has a place in the village council and an opportunity to speak, being the intermediary between the government and the village in matters relating to the development of women and children. Women advocated through this movement and made demands directly to the Council of Chiefs for there to be an internal village policy to address domestic violence and prohibit domestic violence. Women reported that villages like Vavau, Siutu, Vailele, Taga, Asaga, Samatau, Siumu i Sisifo and Faleapuna have now adopted policies and interventions against domestic violence or intimate partner violence.

Palanitina believes that program continuity support must be ongoing, as well as mentorship and capacity building for female board members. The work of building enduring women leaders and influencers to become intergenerational must be ongoing and supported by direct access to technical and financial resources. “O Samoa ua uma ona tofi – Samoa has been defined. Therefore, the village women are comfortable and happy in their roles as long as we support them in their leadership roles, because when we leave at the end of the day, they are still living in the village, still within the confines of the traditional makeup, which should be that of peace and harmony in the village.

Support for strengthening the women’s movement falls under Pillar 6 of the joint EU & UN Spotlight Initiative. The objective of the Spotlight initiative is to eliminate violence against women and girls as well as domestic violence between intimate partners.

The Samoa National Council of Women has been one of UNDP’s main implementing partners under the Spotlight Initiative since 2020.