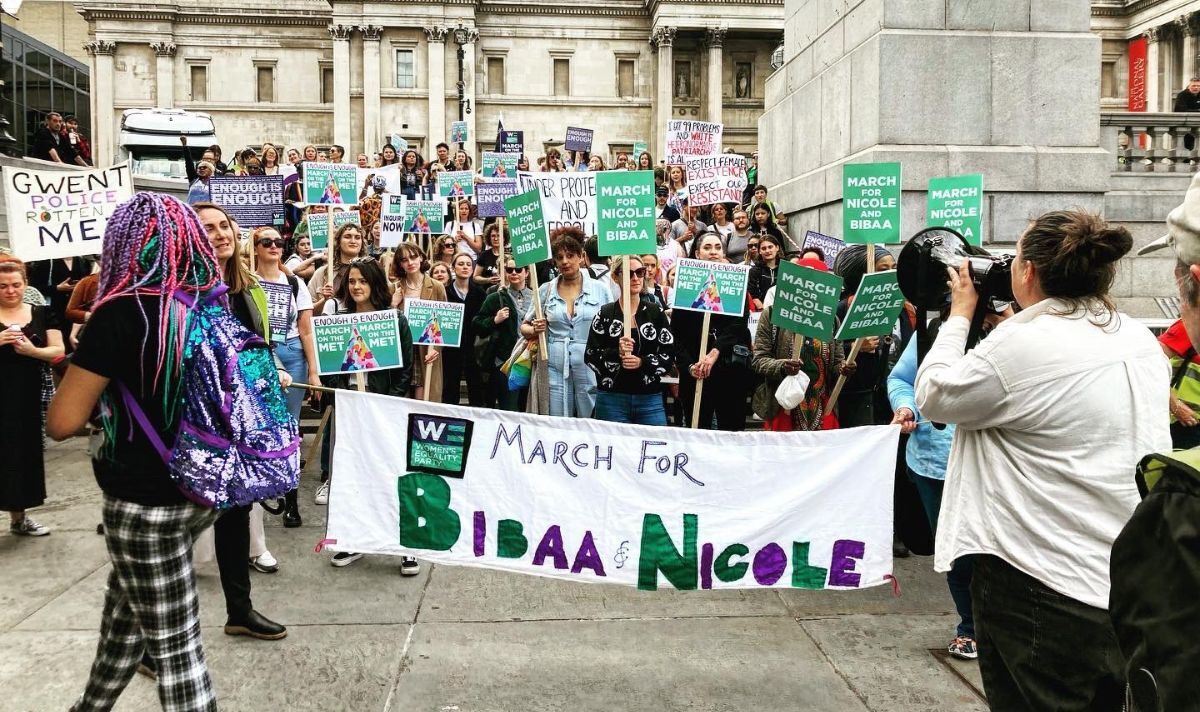 The two sisters Mrs Henry and Mrs Smallman were stabbed to death in Fryent Country Park and their bodies were discovered by family members on June 7, 2020. The march was organized by the Women’s Equality Party who said: ‘Women are betrayed by the institutions paid to protect us again and again.

Not only did the police not search the park following the missing person report of Mina Smallman, Nicole’s mother, but the two officers sent to guard the crime scene took and distributed selfies with the bodies.

It was later reported that PC Deniz Jaffer and Jamie Lewis called the two women ‘dead birds’ in WhatsApp messages and were subsequently jailed for 33 months for misconduct in public office.

Mina Smallman called the men’s actions a ‘treason of catastrophic proportions’ and said in the BBC documentary ‘Two Daughters’ that the discovery of these details meant ‘every reservation we had was then cut off’.

Women’s mistrust of the Met has grown since the kidnapping, rape and murder of Sarah Everard, followed by the brutal treatment of women at the ensuing vigil at Clapham Common.

Patsy Stevenson, the woman at the center of one of the most famous images from the vigil, spoke exclusively to Express.co.uk about the London 10 Mile Walk that started in Fryent Park.

Ms Stevenson said: ‘The first solution would be for the police to accept blame and responsibility, the next step is for them to completely reform the entire policing system, vetting recruits properly and thoroughly while imposing consequences serious for any misogynistic, homophobic, racist and transphobic behavior.

“The force must allow whistleblowing without reprimanding officers or allowing intimidation within the ranks.”

In September last year, the i revealed that more than 750 Metropolitan Police officers had faced allegations of sexual misconduct in the past 11 years, of which only 83 had been sacked.

Meanwhile, 162 Met officers have been arrested for sex offenses, including 38 convicted after appearing in court.

Sistah Space CEO Ngozi Fulani speaking at the event which ended outside Scotland Yard, said: “I am happy to see you all, I am, but look how many people came for Sarah… we can sing ‘power to the people’ but it doesn’t resonate.

“So when you go back to your instant gram, you’re going to ask them where they were.”

The Met Police have been criticized by women’s rights activists for their culture of misogyny and racism (Picture: Express)

Speaking to Express.co.uk, Ms Fulani said the march “is a hugely positive event”.

But added: “It is imperative that people understand that Black Lives Matter in light of new information about police attitudes, including misogyny, racism and child Q.

“The tragic death of Sarah Everard has been the subject of worldwide media coverage and extensive reporting.

“Yet the murders of Biba, Nicole and Sabina Nessa did not have such an impact, highlighting the existence of discrimination even in death.”

“Whenever black women are insulted [and] ridiculed… even in death.

“It is time to re-examine the nature of the police and the justice system and our society as a whole. Walking is an effective way to raise awareness in this regard.

Child Q refers to the backup report released in March of a 15-year-old black schoolgirl who was strip searched for drug possession.

The backup report concluded the incident was unjustified, with racism “likely” playing a role.

The girl was removed from an examination and strip searched by two police officers during which the girl’s private parts were exposed and she was made to remove her sanitary napkin.

Jamie Klingler, co-founder of Reclaim These Streets, the organization that organized Sarah Everard’s vigil before she stepped down due to Met warnings, also spoke at the protest.

Ms Klingler spoke to Express.co.uk about the deaths of Bibaa Henry and Nicole Smallman, saying ‘women of color don’t come within inches of the column, or the covers and details of this case were worse than everything. of us had never read”.

The event brought together speakers and poets (Picture: Express)

She continued: “There’s no way their bodies were found by their relatives. The fact that they didn’t even send officers is beyond inhumane.

She added that the actions surrounding the case are “steeped in racism and must be called out again and again”.

The strong turnout on the last mile of the march from Trafalgar Square saw many women reiterate Ms Klingler’s thoughts that the Metropolitan Police’s reaction to the sisters’ death and Ms Everard’s vigil was the best example of the “disdain absolute the Met has for women – it’s despicable”.

On Tuesday it emerged from the Met Police that their justification for the heavy handling of women at the vigil in Clapham was due to fear of violence towards the police as they felt ‘distress’ that it would escalate into an “anti-police protest”.

Police then issued fixed penalty notices to some people at the vigil for breaching coronavirus restrictions, an issue that has raised eyebrows following the police force’s conduct towards Downing Street lockdown parties, further adding to the distrust of women.

In the wake of the vigil and other issues of Met incompetence, racism and sexism, calls for the resignation of former commissioner Cressida Dick grew.

Speaking of the former commissioner, the Reclaim These Streets co-founder said: “His priority was the reputation of the Mets and not to serve and protect us.

“There are no preventative measures. They haven’t done anything about people flashing, [instead] they talked about facetiming in case there was a fake cop, there was no fake cop.

“It’s all these red herrings… let’s spend money, do all of this rather than actually addressing the issues that we might be talking about. We weren’t invited there for anything.

She added: ‘We’re supposed to expect they’re supposed to find rapists in the public while they’ve been sitting across from them for 14 years and not doing anything about it, like predators in the middle of them?

In February, the Women’s Equality Party called for an investigation into misogyny across all police forces, including the Met, after the Independent Office of Police Conduct (IOPC) gave 15 recommendations to the force to change its internal culture of misogyny, sexism and homophobia.

Ms Klingler scoffed at the idea that the tide might be starting to turn when it comes to resolving this issue, saying: ‘Their refusal to do a statutory inquiry speaks volumes.’

Despite the charged atmosphere of Tuesday’s march and the powerful words of speakers and poets above the beats of the drummers also present, there was also an air of futility.

Ms Fulani’s comments about the message not resonating were reiterated by Ms Klingler who said: ‘If women screaming about it could have fixed it, it would have been fixed a long time ago.

“Nothing has changed…they don’t give anything. Women’s safety is a public relations exercise for the Met and nothing more.

The Metropolitan Police have been contacted by Express.co.uk for a response.

The force said: “The Met has been rocked by a series of horrific events, including the appalling behavior of officers at Charing Cross Police Station between 2016 and 2018, the murder of Sarah Everard, the outcome of Stephen’s inquests Harbor and the heinous actions of PCs Jaffer and Lewis.

“We are fully aware that these events have deeply damaged the trust that people have in us.

“There is a real need for change in our organization. More than ever, we are listening carefully and critically examining ourselves, asking tough questions to improve our culture and professional standards, and we are not underestimating the magnitude of change required.

“The Commissioner has asked Baroness Louise Casey to conduct an independent and thorough review of our culture and standards of professional and personal behavior. The review will ask tough questions to ensure lasting improvements to the service we provide to all Londoners.”