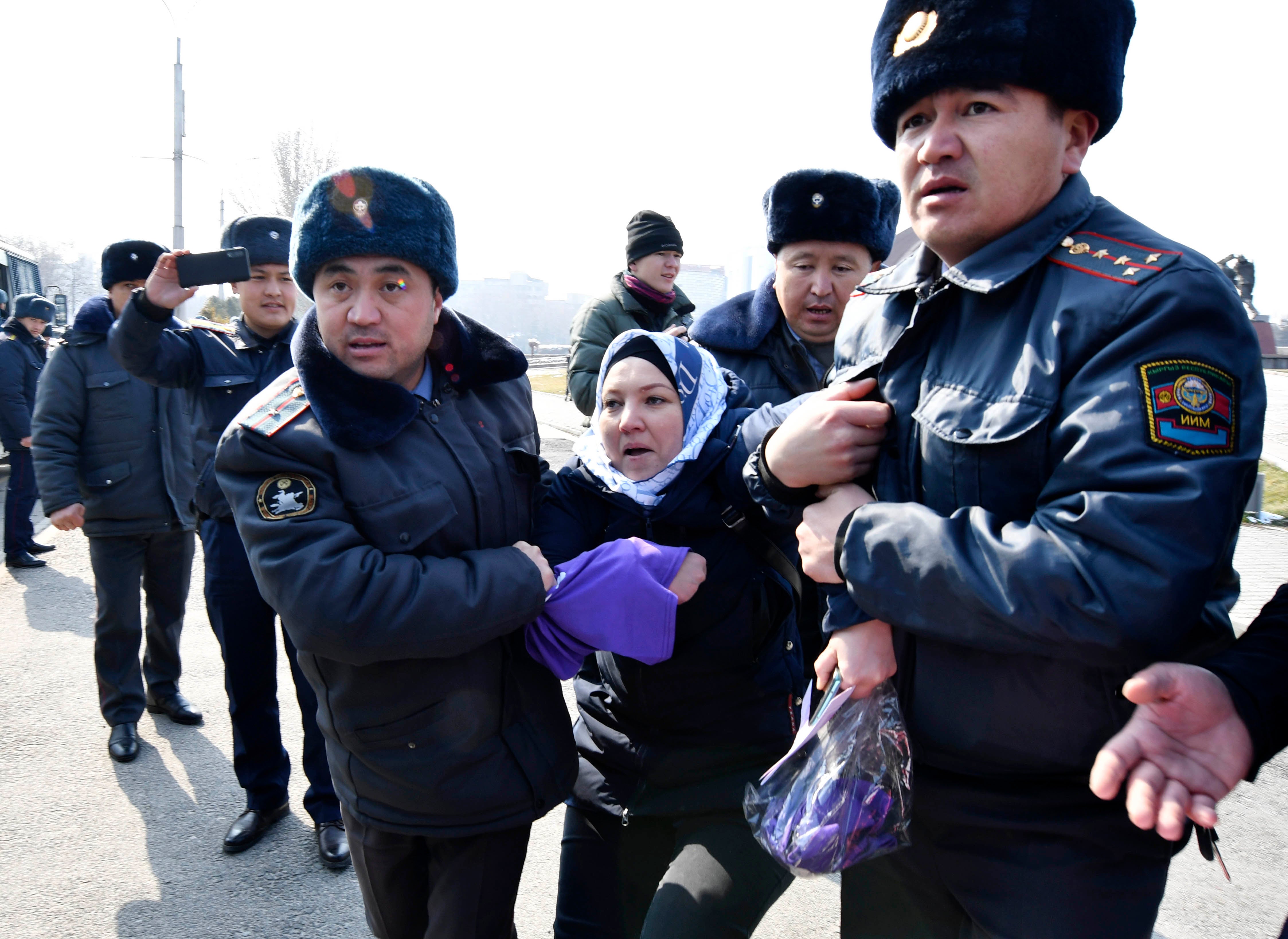 (Berlin) – Kyrgyz police detained around 70 activists, mostly women, for hours on March 8, 2020 without telling them the reasons for their detention or giving them access to lawyers, Human Rights Watch said today. . The activists had themselves been attacked during the peaceful International Women’s Day march in Bishkek, the capital of Kyrgyzstan. At least three journalists were also detained.

A crowd of men, many wearing medical masks or other face coverings, attacked the activists as they started the march to draw attention to the serious problem of violence against women in Kyrgyzstan. The masked men threw eggs at the marchers, dragged them to the ground and destroyed their banners, activists and media reported. When the police arrived, the crowd dispersed, but rather than search for the attackers, the police forced the activists onto a bus and took them to the Sverdlovsk police station in Bishkek. Some reported physical abuse by police.

“People must be protected, not penalized, when exercising their right to peaceful assembly and protest,” said Hillary Margolis, senior women’s rights researcher at Human Rights Watch. “Instead, on a day meant to celebrate women’s rights, these activists were punished twice – first by an angry mob, then by the police.”

Kyrgyzstan’s parliament held a March 11 hearing on the interruption of the Women’s March to question the interior ministry and the attorney general’s office. Deputy Culture, Information and Tourism Minister Nurzhigit Kadyrbekov hinted that the marchers intentionally stirred up a response from officials, saying “they came out to create a stir and cause a stir” in order to “creating a hype”.

Authorities should investigate the circumstances surrounding the mass arrests and attacks on activists and bring those responsible to justice, Human Rights Watch said.

The march was an act of solidarity and protest against domestic violence, forced marriage and other forms of violence against women and girls, which remain persistent problems in Kyrgyzstan despite measures such as a law revised on domestic violence. At least four women have been killed in domestic violence incidents since the start of 2020.

Local media reported that police representatives said the protesters were arrested for failing to notify internal affairs bodies of the rally so they could ensure public safety. In the days leading up to the planned march, a request from the city government for a temporary ban on public events remained in question.

A Bishkek lawyer who followed the case confirmed to Human Rights Watch that six protesters had been charged with disobeying a policeman, which was punishable by a fine of 3,000 to 6,000 soms (about $43 to $86). Five of the attackers were also charged and fined for the same offence.

“You wait for protection from law enforcement, but suddenly it turns out that you are being held and we don’t even know why,” a detained activist told Human Rights Watch. “All trust and sense of security is lost. I no longer feel like I live in a law-abiding country.

In early March, the government temporarily banned all “cultural events” as part of measures to prevent the spread of the coronavirus. At the request of the city administration, on March 5, the Bishkek District Court banned “peaceful rallies and gatherings”, including the Women’s March, until July 1. stating that the ban targeted the Women’s March because of its links to feminism and, in recent years, to the rights of lesbian, gay, bisexual and transgender (LGBT) people.

Following the interruption of the Women’s March, activists held a rally on March 10 to protest violence against women and show solidarity with survivors. More than 400 people attended the peaceful protest in Bishkek, local media reported. Activists who took part in the March 8 events said the detentions may have helped bring global attention to their fight against domestic and gender-based violence in Kyrgyzstan.

“It is thanks to these attackers that the whole world knows how bad women’s rights are in Kyrgyzstan,” Dinara Oshurakhunova, a human rights activist who was among those detained, told Human Rights Watch.

The attacks on this year’s Women’s March are the latest in a trend of opposition to events promoting women’s rights. Members of a conservative nationalist movement opposed artworks incorporating nudity at a November 2019 feminist art exhibition at the National Museum of Art in Bishkek and accused the artists of ‘perverting young people “. The museum’s artistic director resigned after being insulted and threatened with rape.

In March 2019, an International Women’s Day rally in Bishkek sparked controversy and threats of violence when conservative lawmakers and members of a nationalist group opposed LGBT inclusion. in the march, which promoted “equality for all”.

“Participants in the Women’s March were simply calling for action to stop the needless deaths of women from domestic violence,” Margolis said. “Authorities should arrest and investigate the men who used force to stop this march, not the women who were calmly protesting.