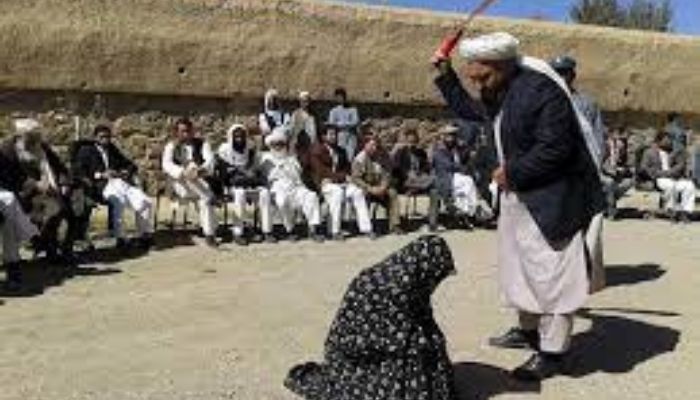 As India’s liberals and secularists openly support Islamists in Karnataka’s ongoing hijab dispute, a documentary covering the aftermath of the Taliban takeover in Afghanistan by Vice News has been released in which a Taliban judge says women cannot become judge under Taliban rule because they have less intelligence and are not good believers. While the hijab is seen as a matter of choice or freedom of religious practice in India, the Vice News documentary is directed by a female reporter who wears a hijab throughout the story. She was also forced to wear a full burka strictly under Sharia law when visiting a Maulana for an interview.

The documentary made by Vice News covers many aspects of Afghanistan under Taliban rule over the past six months. It focuses primarily on the lives and plight of women, illustrating how their human rights are brutally crushed under Islamic rule in a nation that has briefly had a glimpse of even an incomplete worldview over the past 20 years. years, when the Taliban were not in power.

Taliban judge who studied in a religious school in Pakistan: “Women cannot become judges because they have less brains” @IsobelYeung
How soon will our leftist-Islamist gang in India demand the same as they justify Hijab for children? pic.twitter.com/88LSDXF5Je

Now that the Taliban has returned to power, Afghan women face more and more problems every day, while the Taliban, on the other hand, continue to believe that the laws are naturally different for a man and a woman, and that ‘they should be treated differently. The Taliban also believe and propagate that whatever is happening with women in the country right now is their internal affair and furthermore there is no problem or injustice towards women. The Taliban say these are just the problems of recent government changes and that everything will work out in time.

The documentary covers various regions of Taliban-ruled Afghanistan. It reveals that women have no human rights in the Islamic regime there. Marrying a 15-year-old girl to an 80-year-old man in exchange for a little money and a few sheep is normal. Women are regularly beaten by their husbands. So much so that their hands, legs, noses, etc. are broken.

One such case is mentioned in the documentary in which the female victim had filed a complaint against her husband with all the evidence of domestic violence, including medical reports. She was asking for a divorce and the lady judge of this court had ordered the separation of the couple. Before the judgment was handed down, the Taliban took control of the country. Now the woman is forced to stay with her husband who continues to beat her regularly and the lady judge who handed down the judgment is living somewhere secretly hiding her identity fearing Taliban torture.

A Talibani judge who had dealt with this case in the new Islamic configuration was asked about it. Responding to the journalist, he said: “It was a very simple case. She just made allegations. She had no witnesses to the domestic violence she invoked. On the other hand, her husband had sworn by the holy book. So you had to believe it.

Then he was asked if women could do his job, to which he replied, “No. Because women have less brains and they are not good believers.

Another similar case is explained in this film in which an underage girl was forcibly married to an 80-year-old man who regularly tortured her. He was asking her for a child he was no longer capable of producing. When she tried to escape his clutches, he accused her of adultery punishable by stoning to death under Sharia law. She somehow escaped and managed to live in a shelter run by a women’s rights activist who herself lives under threat.

Vice News also covered how the Taliban regime stopped girls’ education and forced them to wear burkas everywhere. While explaining the difference in God’s law for women, a talib clearly states that women are expected to live at home and serve their husbands. According to him, this is not a problem and no woman in Afghanistan is offended by this rule. Earn money, take care of the family, etc. are male jobs. No wonder a child in the documentary was seen ready to become a Talib like his father was.

Besides, Vice News also shared how eager people are to leave this country. Many people wanting to go to Pakistan are said to have been stopped at the Durand Line amidst all the lawlessness that could ever visit the place. From sick and crying children to begging mothers and hopeless youngsters to an old man waiting weeks to cross the border, Afghanistan under the Taliban regime has become home to all possible misery.