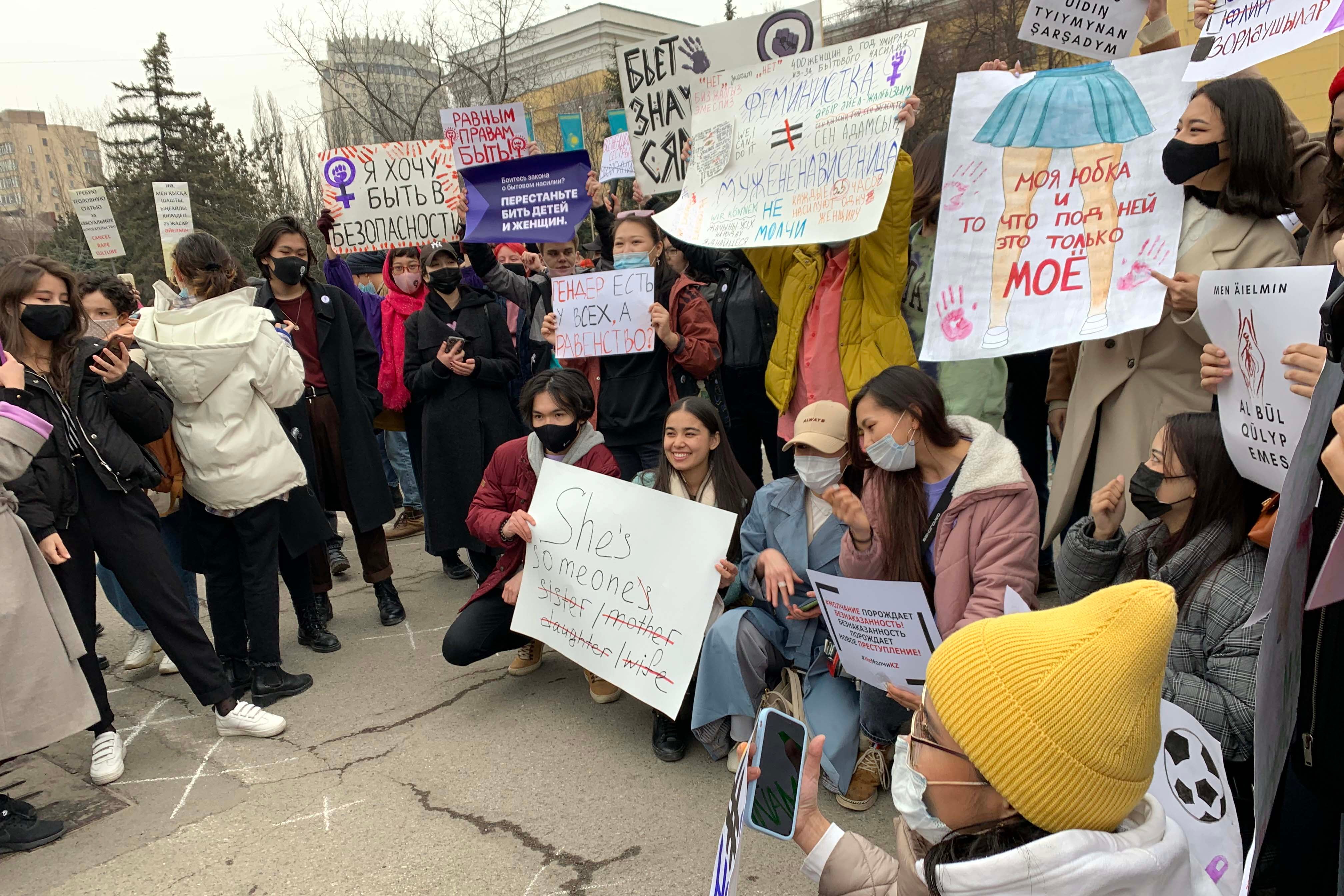 On November 16, 2021, three Kazakh activists, acting on behalf of five feminist groups and activists – KazFem, Feminita, FemPoint, Svet and FemAgora – requested permission to hold a peaceful march and rally in Almaty on March 8, 2022. The Almaty city administration, in written responses, rejected the demands on November 26, citing a conflict with “cultural and entertainment events” and “repair and installation work” that were reportedly scheduled that day in exactly the same place and at the same time. Activists plan to appeal.

“Authorities in Kazakhstan should support the efforts of feminists and women’s rights activists to improve protection against gender-based violence and for women’s rights in general, without denying them the right to peaceful protest,” said Vika Kim, Assistant Researcher for Central Asia at Human Rights Watch. “Women in Kazakhstan demand gender equality and better protection and support, calls to be heard, not hindered. “

Kazakh authorities should respect the right to peaceful assembly and allow next year’s International Women’s Day event, in which women’s rights activists intend to protest gender-based violence and express their demands for equality.

Domestic violence is a very serious problem in Kazakhstan. Hundreds of women flee each year from their abusive partners, husbands or other family members and seek help and refuge in the limited number of crisis centers and shelters across the country, some run by the government and others by non-governmental groups.

The government’s weak response to domestic violence has left women with little realistic or meaningful recourse to justice. Police and judges do not respond adequately to allegations of domestic violence, and in the rare cases where cases go to court, the penalties for abusers are inadequate. The lack of professionally trained social workers, psychologists and lawyers is also a major obstacle to obtaining protection, Human Rights Watch said.

In response to demand for a march in March 2022, one of the activists told Human Rights Watch, Almaty city officials met with the event’s organizers on November 24 and urged them to “Revise their plans [to hold a procession]Citing the “epidemiological situation” in Almaty. Officials have asked organizers to withdraw their candidacy for the march. Activists refused and told officials they would insist on their right to hold the march.

Despite claims by the Kazakh leadership that a new law passed in May 2020 reforms Kazakhstan’s legal framework for peaceful assembly, it falls far short of international standards. Authorities routinely deny permission to organize peaceful protests, forcibly disperse protests, and impose fines or detention of peaceful protesters. In 2021, police increasingly used the controversial crowd control tactic known as kettling – surrounding and confining protesters to small areas – to detain groups on the streets for hours.

In March, Almaty held its first authorized march for International Women’s Day, with hundreds of peaceful protesters calling for better protection of women’s rights, gender equality and the criminalization of domestic violence.

Women’s rights are a key human rights issue in Kazakhstan. President Kassym Jomart Tokayev has repeatedly publicly recognized the importance of eliminating discrimination against women and the need to strengthen women’s rights. And while there have been positive developments in recent months, such as the October abolition of the list of prohibited professions for women, other pressing long-standing questions regarding women’s rights remain unanswered.

In January, lawmakers suspended consideration of a domestic violence bill to strengthen existing protections, and since then have offered no alternative legislative initiatives to effectively address domestic violence.

Human Rights Watch has repeatedly called on Kazakhstan to explicitly criminalize domestic violence and greater accountability for perpetrators, as well as better support and services for survivors of domestic violence, including in rural areas.

Kazakhstan’s international partners should urge the Kazakh government to criminalize domestic violence as a stand-alone crime. They should also call on the authorities to respect the freedom of assembly of women’s rights groups, including granting them permission to organize a peaceful march and rally for International Women’s Day in 2022.

“The empty reform promises of the Kazakh government do not protect women from abuse,” Kim said. “The Kazakh authorities must take meaningful steps to protect women and their rights, including criminalizing domestic violence, and abandon any pretext to deny groups their right to peaceful protest on March 8. “

2021-12-10
Previous Post: Saudi women’s rights activist sues three former US intelligence agents for hacking to benefit UAE | Piracy
Next Post: The Taliban and the future of women’s rights in Afghanistan