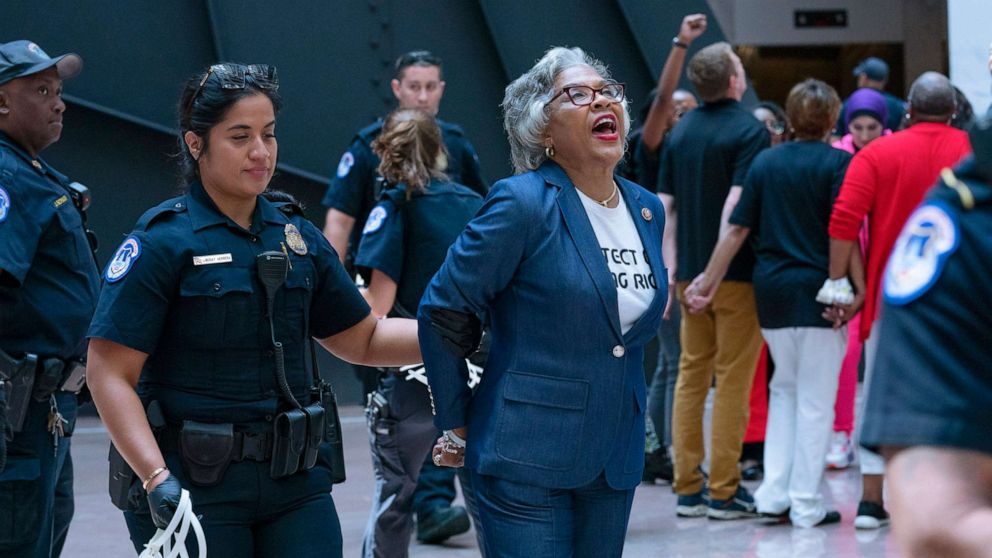 Vice-President Kamala Harris met with Melanie Campbell, president of the National Coalition of Black Civic Participation, and other black activists in the Roosevelt Room on Friday to discuss voting rights.

Many women invited to the meeting took part in a civil disobedience protest on Thursday at the United States Capitol.

Representative Joyce Beatty, D-Ohio, chairman of the Congressional Black Caucus was among nine protesters who were arrested by U.S. Capitol Police after leading a peaceful protest to defend the right to vote inside the Hart Senate office building.

At least 20 black women activists have rallied against legislation across the country that Democrats say restricts Americans’ right to vote. They called for federal intervention and in particular an end to the filibuster rule, so that the US Senate can pass the For The People Act.

Protesters walked into the Senate building hand in hand on Thursday, chanting and chanting: “Let the people vote!”

“This afternoon nine people were arrested for demonstrating in a no-go area on Capitol grounds. At approximately 3:30 p.m., United States Capitol police responded to the atrium of the Hart Senate office building. for reports of illegal protest activity, “said a United States Capitol. According to a police statement.

“After officers arrived at the scene, they warned protesters to stop three times. Those who refused were arrested for DC code §22-1307. Two men and seven women were transported to headquarters. of the USCP for treatment, ”the statement continued.

Harris praised the activists at their meeting for their efforts to pressure Congress to pass voting rights legislation and compared them to Fannie Lou Hamer, Ida B. Wells and other pioneering black women civil rights.

“I look at the leaders who are at this table, who are also women, and also black women, and I see Sojourner Truth. When I look at the women at this table, I see Ida B. Wells, Amelia Boynton. I see Fannie Lou Hamer; I see Constance Baker Motley. And these are the modern versions of these great women that every American, every American has the blessing and the privilege to stand on. [their] shoulders. So this meeting was a meeting and a discussion between leaders, who are national leaders, who are American leaders, about what we need to do collectively as a nation to defend our democracy, ”Harris told reporters.

The vice president also said she spoke to German Chancellor Angela Merkel on Thursday about voting rights, telling reporters that “this is an issue regarding America’s position in the world”.

“Yesterday, I welcomed the Chancellor of Germany to my home at the official residence of the Vice President of the United States and we discussed our collective responsibility to fight for democracies around the world. And in the context of this conversation on the franchise in America was raised because it’s not just an issue for us as Americans in terms of our ability to exercise our voice, our rightful voice in our democracy, it’s also an issue that is about America’s position in the world. What if we can continue to present ourselves as a democracy and therefore a world leader, “said Harris.

Sixteen states have enacted 28 laws that would restrict access to voting, out of hundreds that have been introduced across the country, according to the Brennan Center for Justice at the NYU School of Law.

In March, House Democrats brought forward the For the People Act, a broad package that would transform federal elections, voting and congressional redistribution – but it stalled in the Senate after failing in a vote of procedure at the end of last month, facing opposition from all Republicans. Senator Joe Manchin, DW.Va., has said he will not end the filibuster to make way for the bill.

The protest comes just two days before the first anniversary of the death of the late Representative John Lewis, a civil rights icon who marched alongside Martin Luther King Jr. in Selma, Alabama, on the “Bloody Sunday” in motion civil rights. .

After his arrest, Beatty tweeted in Lewis’ honor with the caption “#goodtrouble”.

2021-07-16
Previous Post: The pandemic has not stopped the rise of the women’s movement
Next Post: No big impact of childbirth on women’s employment prospects, UN study of rural Indian women finds