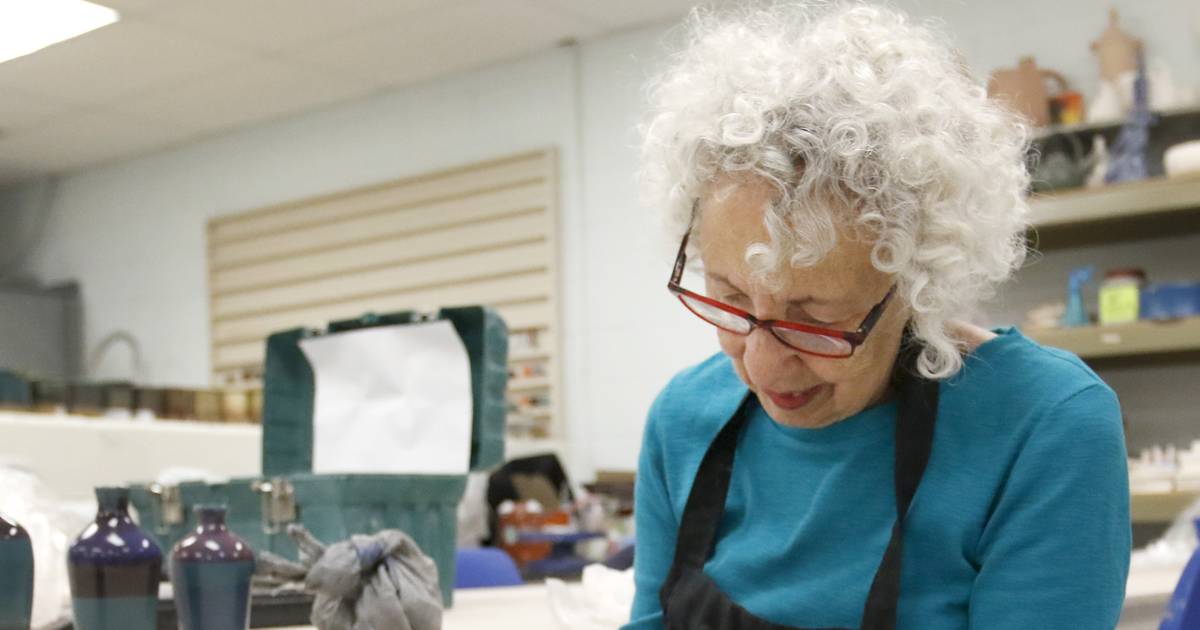 During Elaine Kadakia’s 83rd birthday, she marched in Springfield for women’s rights, stood up to raise awareness of violence against women, and raised her two daughters.

Now Kadakia, from Huntley, makes ceramic art depicting the struggle for equality she has seen women endure over the years. Some of his favorite pieces are on display at McHenry County College in an exhibit called “A Journey in Ceramic Activist Art,” which runs through Monday.

“Each piece represents a certain moment in my life,” Kadakia said.

The exhibit, which includes around 20 pieces, is the first for Kadakia, who now lives with her husband in the Sun City community of Del Webb in Huntley. But it took a lifetime to do.

In the 1960s Kadakia earned a bachelor’s degree from the Art Institute of Chicago.

She grew up in Chicago and is Jewish and married to Jayant Kadakia, her husband of 54 years, originally from Mumbai, India, and practicing Hinduism. The marriage prompted more than 15 trips to India to visit her husband’s family.

These trips, Kadakia said, also exposed her to how women are treated in some parts of the world. The tours showed him the beautiful colors of Indian culture and the sarees worn by women seen in his ceramic pieces. All these elements have inspired his collection of ceramics.

She has lived her life raising two daughters and advocating for women’s rights with her voice and through her art.

Kadakia has been an active member of the American Association of University Women, which values ​​and promotes equality for women in the workplace, reproductive rights and the advancement of women in leadership roles, she said. declared.

She marched with her two young daughters at the 1976 Equal Rights Amendment rally in Springfield, where her husband worked for the state of Illinois and where they raised their family before moving to the McHenry County area in 2001.

She has also taken part in recent efforts in McHenry County to promote women’s rights, including the recent march for women’s reproductive rights in Woodstock.

Her youngest daughter, Maya Kadakia, recalls that when she was growing up in Springfield, her mother created the art of pointillism at the kitchen table and taught art classes at a Jewish temple and in a home. of retirement. She also remembers participating in ERA rallies and a Take Back the Night protest against violence against women when she was in college.

“She helped make me the feminist I am today,” her daughter said. “She’s always been incredibly supportive of me being independent, doing what I want to do, wearing what I want to wear, and being a full human being.”

Maya Kadakia, who is now an artist and teaches social studies and traditional New Guinea dance to middle school students in Madison, Wisconsin, said her mother made her feel important in this world, even as a young lady. She not only marched with her mother for the protection of women, but designed the T-shirts worn during the march depicting silhouettes of women dancing under a night sky.

She said she was “grateful” to her mother.

“It’s really great to be taken seriously at such a young age and to be in a community of diverse women all working towards the same goal,” she said. “I’m really grateful to my mom for being such a supporter of this.”

About her mother’s works, Maya Kadakia said she was inspired by “the way she lets her spirit shine through”.

At a young age, Elaine Kadakia said she realized art could “send powerful and meaningful messages”.

Describing Elaine Kadakia’s approach to her ceramic projects, her instructor Tom Vician said, “She is fearless. »

“She pushes the boundaries of clay,” Vician said. “Her works are always based on ideas. Everything she creates comes from an idea that she has first, and then she creates the work.

And this “idea” for Kadakia is women, women’s rights, their oppression and their passion.

“She likes to take risks and she’s not afraid to take risks when starting new projects. She just goes for it, she doesn’t hold back,” said Vician, who teaches traditional forming techniques in her class, such as wheel throwing and hand building, as well as newer techniques such as 3D printing, cooking with soda. and formulation of glazes.

Vician said Kadakia is skilled in traditional 5,000-year-old techniques of wheel throwing and hand building. But she also works with new techniques. She’s also not afraid to mix techniques, as seen in her pieces “Women Emerging, 2020” and “We Paved the Way to Women’s Right to Vote,” depicting Susan B. Anthony and other prominent women. in the women’s suffrage movement.

“I always try to come up with something new and interesting every semester, and she’s always up for exploring a new technique,” Vician said.

Of her very first show, Vician said, “Elaine absorbs it all. She’s on cloud nine and it’s wonderful to see.

Vician is exploring opportunities to share Kadakia’s showcase with other universities and community colleges.

Kadakia’s exhibit is in the Art Space room, A-144, near parking lot B, across from the gymnasium. Information about art courses offered at McHenry County College is available at www.mchenry.edu/art/.