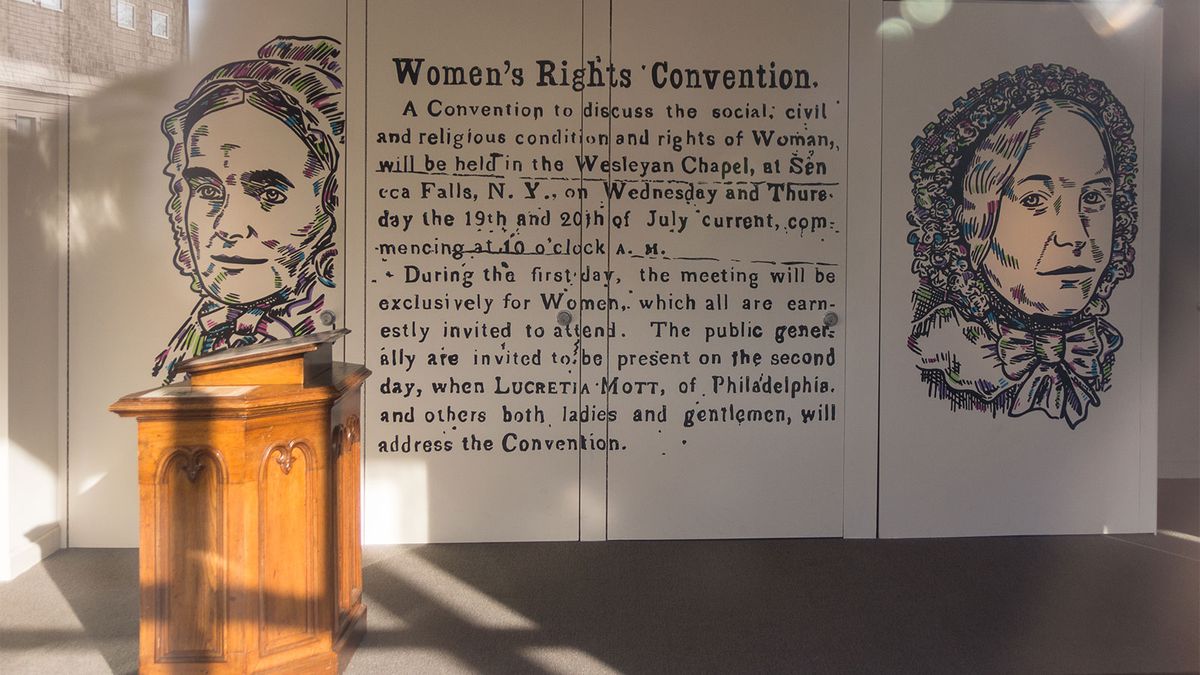 In July 1848, a remarkable event took place in the town of Seneca Falls, New York. It was a convention on women’s rights, the first ever held in the United States. More than 200 women attended the event originally organized by five women – Lucretia Mott, Elizabeth Cady Stanton, Martha Wright, Mary Ann M’Clintock and Jane Hunt – friends and comrades of the abolitionist movement. They hoped, but had no way of knowing, that their event, eventually known as the Seneca Falls Convention, would become the starting point for the women’s rights movement in the United States.

So who were these women and why did they meet in Seneca Falls? Why not New York, Philadelphia or Washington, DC? We spoke to Janine Waller, Chief of Interpretation, Education and Outreach at Women’s Rights National Historical Park in Seneca Falls.

“Their ties were all family and religious,” Waller says. “And it was really because of the involvement of Quakers that they got involved in the abolitionist movement.”

The “first five”, as the five friends were later called, were connected through the Quaker Society of Friends in Philadelphia. Lucretia Mott was a Quaker minister and one of the founders of the Philadelphia Female Anti-Slavery Society. She was a charismatic speaker and, at the time, one of America’s best-known women. Mott met Elizabeth Cady Stanton, another ardent (but not Quaker) abolitionist, at the 1840 World Slavery Convention in London where she and her husband Henry Brewster Stanton were on their honeymoon. Stanton’s husband, a professional abolitionist speaker, was invited to speak at the conference, but when the two women were prevented from fully participating in the convention, they turned their righteous anger into considering holding a convention on women’s rights in the United States.

It took eight years before they found each other. At this time, the Stantons were living in Seneca Falls, and Mott was invited to speak in the area. Mott’s sister, Martha Wright, also lived in nearby Auburn. The M’Clintocks rented a house and property from the Hunts in Waterloo, New York. The five women met at the Hunt House in Waterloo and decided to hold the women’s rights convention while Mott was still in the area.

These tools came in handy because they only had 10 days, from when they decided to hold the convention, until the convention itself – July 19-20 at the Wesleyan Chapel in Seneca Falls. Fortunately, they were women with networks – notably their abolitionist and Quaker networks. They also advertised the July 11 convention in the local newspaper, the Seneca County Courier, and in The North Star, a newspaper published by abolitionist, speaker, writer and activist, Frederick Douglass. Douglass was also personally invited to the convention by M’Clintock. He accepted and was the only black man and person of color registered at the event. When July 19 arrived, about 300 women and men (mostly from the central New York area) were in attendance.

The first day of the convention was all-women and began with a moving speech from Stanton, setting the stage for what was to follow:

We come together to protest against a form of government existing without the consent of the governed – to declare our right to be free as man is free, to be represented in the government which we are bound to support… We stand come together to elevate the fallen divinity of woman to a pedestal equal to that of man. And, as strange as it may seem to many, we are now claiming our right to vote in accordance with the declaration of the government under which we live.

They presented the Declaration of Sentiments, of which Stanton co-authored. The document was modeled after the Declaration of Independence and set out women’s objections to topics such as women’s suffrage, access to education, domestic violence, equal pay and equal employment. justice in court, including in inheritance and custody disputes. Although women’s suffrage was a key item on the agenda, it nearly broke convention and Waller says the reasons were as diverse as the people debating it.

“A lot of people felt that politics was inappropriate for women who were seen as the moral compass of the family,” she says. “Participating in politics would defile them. Others thought women were not intellectually prepared to vote. They would just vote for whoever their husbands told them to. Still others thought it was just not that important. issues of domestic violence, equal pay and court and family law; these were more immediate concerns. It was Frederick Douglass who supported Elizabeth Cady Stanton in her insistence that all these other things could not be changed without political and legislative power and that is what the right to vote would bring.”

The Statement of Sentiments was much more than a long list of grievances.

“It includes a list of resolutions, the things they decide to do, and it’s very explicitly laid out,” Waller said. “It’s very specific, visionary and unequivocal. Women and men should be equal. Period. They are equal. Period. [These sentiments] are coming out of the abolitionist movement and people are asking what is the difference between one person and another, and what kind of power do they have to bring about change in their own lives and in society in general.”

The new movement, the women’s movement, was suspended during the civil war and immediately after due to reconstruction. But Waller says a gradual opening up of society, including tangible gains in the legal system on behalf of women, occurred in state homes even before 1920, when the 19th Amendment guaranteeing women’s suffrage. women was finally ratified.

But the lasting legacy of the Seneca Falls Convention remains more than any amendment or issue will ever contain.

“At some point, these five women made the decision to do something different — they made the decision to go public with their concerns,” she says. “They took the opportunity that was presented to them and it’s something we can all do. This legacy of empowerment is what normal people can do when they come together and share things openly. They change the world.”

2022-03-22
Previous Post: 3 Indigenous Women Activists to Celebrate as a Family During Women’s Month and All Year Long
Next Post: What disability rights activists can learn from women’s rights activists