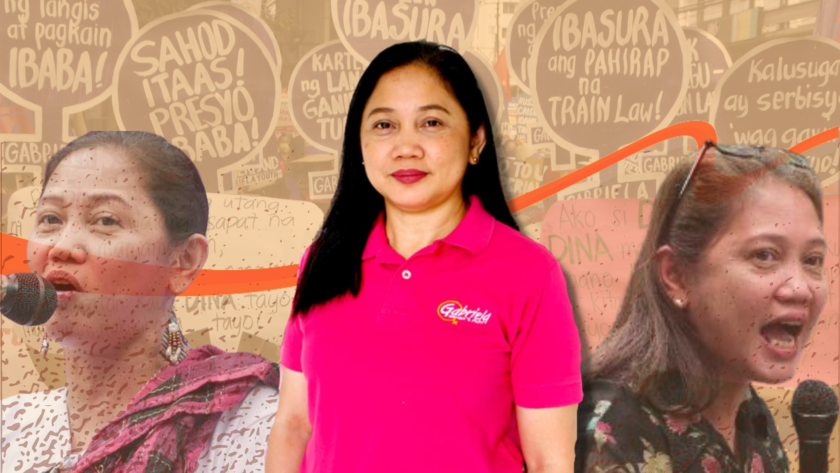 “This is what our current situation demands: that women stand up and fight, not only for their rights, but for the liberation of the nation to which they belong.”

MANILA — Arlene Brosas, who currently serves as a lawmaker for the Gabriela Women’s Party, still remembers having so little money that she walked to attend her classes at the Diliman campus of the University of the Philippines . She did not immediately become an activist. But she quickly followed through as her eyes slowly opened to the realities of fighting for the rights of women and children.

“University taught me to be independent and to have faith in my principles. And I remained faithful even after leaving university and starting to fit in with the masses,” Brosas told Bulatlat in an online interview.

Brosas is the current top candidate for the Gabriela Women’s Party, which has championed the rights and welfare of women and the poor for the past two decades in the House of Representatives. Here they pushed for women-friendly legislation, including extended paid maternity leave laws, the Violence Against Women and Children Act and the Safe Spaces Act. They also proposed measures on reproductive health care, divorce and those aimed at providing economic relief to poor Filipino women.

Lily: How a women’s party found its voice, pursued women’s rights and well-being in a male-dominated Congress

Pushing for this program of change, however, has not been easy.

The Gabriela Women’s Party, with its community organizers on the ground, is among the organizations regularly labeled by the Philippine government for its critical stance on policies deemed contrary to the rights and well-being of ordinary people.

“This is what our times demand of us: for women to stand up and fight, not just for our rights and the rights of children, but for the well-being of our entire nation,” Brosas said.

Seeking opportunities, the de Brosas family left their hometown of Samar. But her father, a policeman, later died, forcing her older siblings to quit school and later go to work to help their mother make ends meet.

Third in a generation of five, Brosas did his part by studying well. She completed her primary and secondary education at UP Integrated School and later entered the University of the Philippines on a scholarship program while juggling her job as a research assistant.

Activism for Brosas, however, only entered his life after graduation, as a member of Tumbang Preso, a progressive multimedia group. While teaching at UP Baguio and later at UP Manila, where she taught Filipino Literature, Humanities, and Science, Technology and Society.

She was also a member of Ugat Lahi, a group of cultural workers behind countless effigies in large protest actions. Brosas helped create effigies for protest actions during the administrations of former presidents Joseph Estrada and Gloria Macapagal Arroyo. She also wrote poems about love and politics.

In 2017, Brosas served as executive director of Akap sa Bata ng mga Guro Kalinga, Inc., a faith-based group that partnered with local and international children’s groups such as Unicef ​​and Save the Children. This institution focused on child labor and provided early childhood care. At the same time, she was also the spokesperson for an anti-child pornography alliance that lobbied for passage of Republic Act 9775 or the Anti-Child Pornography Act of 2009.

“We need real change in our society. We want a future for our next generation centered on peace and justice, decent socio-economic conditions and freedom of culture, among others. This is what we fight for as women,” Brosas said.

“The liberation of women from systematic oppression and gender-based violence is linked to the defense of the struggle of the broader masses,” she said.

Over the past few months, Brosas, Gabriela’s first Women’s Party candidate, and physician appointee Jean Lindo and consumer rights advocate Lucy Francisco have been at the forefront in sharing Women’s Party platforms and visions. by Gabriela.

These include spending a day in a community facing demolition threats in Cebu and distributing their leaflets in the mountainous part of Quiot in Cebu where poor urban families have been relocated. Here, they consulted mothers about the conditions they face. They also seek to engage with local government units to partner with them on programs for women and children.

“Our experiences push us to fight because we have to change the system we are part of,” Brosas said.

Despite his busy schedule, Brosas always finds time to bond with his family and watch a few episodes of K-Dramas. Currently, she is addicted to C-Drama (Chinese TV drama), Love and Redemption.

For Brosas, the victory of Gabriela’s Women’s Party in the upcoming elections is also a victory for securing the rights and well-being of Filipino women amid deepening political and economic crisis.

More than two years into the pandemic, the Center for Women’s Resource in 2021 said women face food security challenges and live below the global cost of living of $1.90 (97 pesos) per day. The independent think tank Ibon Foundation, by contrast, said the number of unemployed women rose to 1.6 million, from 702,000 to 877,000.

Brosas said it was important to make women’s voices heard again at the 19th Congress, especially by presenting comprehensive demands for the marginalized.

“The voice of the masses must echo through the streets to parliament. We need to empower women and the mass movement together. We are moving beyond what we have done and continuing our march towards a progressive society,” Brosas said. (JJE, RTS, RVO)