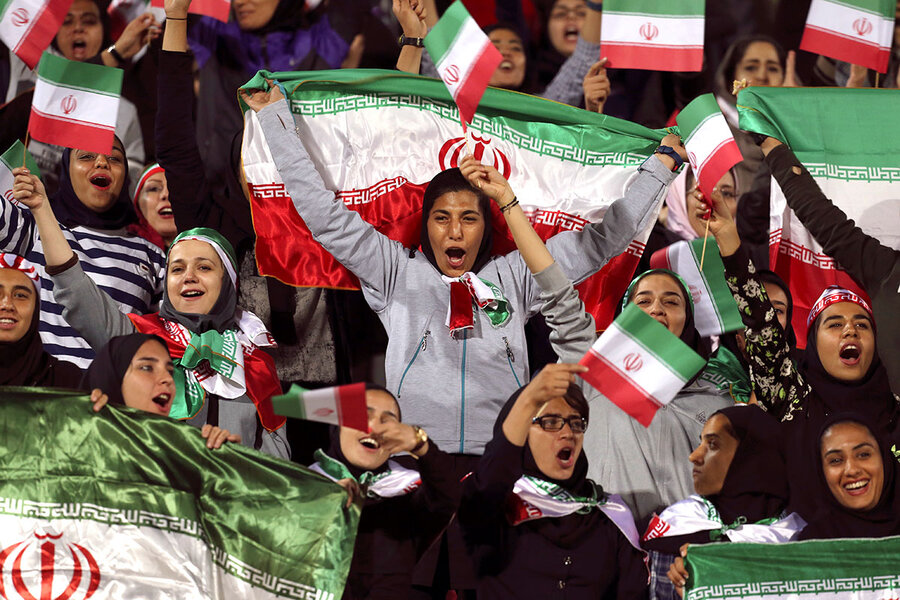 For the Iranian women’s movement, progress is slow. But it is progress.

When Iran allowed a select group of women into Tehran’s Freedom Stadium to watch the men’s national football team play, some Iranian women abroad dismissed it as an inconsequential “trick”. But inside Iran, where women activists have fought for equal social rights for decades against a tradition of patriarchy, it was a sign of real, albeit slow, progress. President Hassan Rouhani has made easing social restrictions part of his platform since his first election in 2013. But political setbacks have reduced his ability to push for social change. “There are many, many sad stories across the country, but in general women are more in power, more in charge of their lives,” says the owner of an art gallery in Tehran. Sometimes sad stories can be turned around. When a gymnast was arrested for posting videos of herself dancing online, she was forced to make a televised confession of immorality. It was too far, for most. “In a society that craves heroes,” wrote the moderate son of a top cleric, “you have successfully transformed a once simple dancer into a social activist, civil activist, cultural warrior and heroine of the new generation. .”

Why we wrote this

Observer or participant? When evaluating change, the frame of reference is important. The same goes for the progress of the women’s movement in Iran. As one woman told us: “You don’t change a patriarchal society overnight.

Excited by the historic significance of their presence after years of campaigning, the women draped themselves in Iranian flags and flooded social media with exuberant selfies.

The Islamic Republic has banned women from participating in live men’s sporting events such as soccer and volleyball for most of its 40-year history.

Why we wrote this

Observer or participant? When evaluating change, the frame of reference is important. The same goes for the progress of the women’s movement in Iran. As one woman told us: “You don’t change a patriarchal society overnight.

But this time, women were given separate seats, entrances and toilets. Most were hand-picked national-level football players themselves or worked for Iran’s football federation.

Savoring the moment, few left immediately after the game, and not before voluntarily clearing the rubbish from their section of the stands.

“For years I’ve been walking by you [Freedom Stadium] and you were just a big question mark,” actress Nafiseh Roshan wrote on her Instagram page. “What a special feeling to watch football in the best stadium in your country!”

Outside Iran, this reference may seem inconsequential, and has even been dismissed by some Iranian women abroad as a “trick” orchestrated by officials to give the appearance of a relaxation of social rules, so repression and arrests continue.

But inside Iran, where women activists have fought for decades for equal social rights and respect in the face of a tradition of patriarchy – not to mention strict social rules since the 1979 Islamic Revolution, which compel women to cover their hair and mask the shape of their hair. body, among other restrictions – entering the stadium for a live match was the latest sign of slow but deliberate progress.

“There are many, many sad stories across the country, but in general women are more in power, more in charge of their lives,” says Nazila Noebashari, owner of an art gallery in the center from Tehran.

“It has not been easy for Iranian women. But we also did amazing things, all of us,” says Ms. Noebashari. She notes relative progress on laws, the number of women currently serving as local and district officials and in parliament, and the fact that female university students far outnumber males.

“You don’t change a patriarchal society overnight; for centuries women have been living in dark corners, abused and even abandoned,” says Noebashari. “But now everything has changed and there’s no turning back. More and more, we’re seeing independent women… stepping forward and all kinds of good stories – and also bad ones.

President Hassan Rouhani has made easing social restrictions a popular part of his declared agenda since his first election in 2013. He has criticized overzealous gasht-e ershad morality police patrols, for example, to “hang on to people’s collars on the street”, stating that this is “not the right way to instruct virtue”.

But in Iran, social change is inextricably linked to the dizzying swings of politics, which often pit officials and hard-line clerics against reform-minded politicians and activists. Mr Rouhani is already beleaguered by political opponents for failing to improve the economy as he promised after Iran agreed to the landmark 2015 Iran nuclear deal, and one result is that many social changes have barely been tangible.

“Many taboos are broken, but we are far from perfect,” said Shahrzad Hemmati, a journalist with the reformist newspaper Shargh who writes about women’s issues.

“We should not depend [Rouhani’s] government, because the government itself is involved in a fight,” she said. “That is part of it, being arrested, detained. It’s part of the story of standing tall, of being strong. There is a saying in Persian that “your skin gets thicker”, like a rhinoceros.

Yet women’s activists have received support from several women parliamentarians. MPs joined activists in June, sitting on the Freedom Stadium track to ensure women – after a raucous public brawl – were allowed to watch on video screens as Iran’s national soccer team played matches in the World Cup in Russia.

“It’s progress, but we can’t say that a big circle is opening up before us,” says Ms. Hemmati. “Everything we do with civil rights is political in Iran. They treat us like it’s anti-man and anti-religious things. Even when you see good and positive action being taken, other roads are closed.

Legislator Parvaneh Salahshouri, from the President’s “Hope” faction, speaks proudly about her role in producing the “women’s empowerment” elements of Iran’s 6th five-year development plan, presented in March 2017, which addressed the family issues and promoted women in the labor market. She notes a doubling of the number of women in official positions in all areas, from local and municipal positions to national office in recent years and says the change should be “constant and steady”.

“Women are not as constrained or pressured as [outsiders] say,” says Ms. Salahshouri. “They can go wherever they want. They can study. There are women entrepreneurs. They can express their demands more explicitly and more freely. The image they are trying to create of an Iranian woman [abroad] is totally different from someone who comes to Iran and witnesses it with their own eyes.

From dancer to cultural warrior

Yet there is no shortage of bad news for the women’s movement. A young Iranian gymnast, Maedeh Hojabri, was arrested this summer for posting videos of herself dancing, for example. She was forced to confess to creating “immoral” videos on public television, in an episode that was widely condemned, even by diehards.

The arrest and confession ended up backfiring.

“It was such a miracle!” wrote Mohsen Bayat Zanjani, the moderate son of a senior cleric, in an online post. “In a society that craves heroes, you’ve successfully transformed a once simple dancer into a social activist, civil activist, cultural warrior, and next-gen hero.”

Since mid-2017, women who protested compulsory hijab rules by taking part in a so-called #WhiteWednesday campaign – in which they remove their head coverings and hold a white scarf on sticks above their heads – have been stopped one after the other.

“The regime agrees with these [protest] because it’s easy to identify people, detain them and scare them into protesting again,” says a veteran journalist who asked not to be named. “You see campaigns being born, then they are gone.”

But a videotape of the incidents, along with footage of vice squads aggressively challenging reasonably dressed Iranian women, has sparked outrage. An event last April went viral.

Actress Taraneh Alidoosti, star of Oscar-winning film ‘The Salesman’ who has 5.3 million Twitter followers, echoed many when she wrote of the incident: “Clawing hair and a woman’s headscarf is not “orientation”, girls for your values ​​is not advice, it is savagery, it is the “patrol of choking, intimidation and barbarism”.

A shop owner in Tehran works under a yellow sign created by the @HarassWatch campaign by Iranian female activists to tell men that harassing women is a ‘crime’ under Islamic law and that women should be respected, September 21, 2018 .

Yet such popular reactions are progress for the Iranian women’s movement. Much like an anti-bullying campaign that took root alongside the #MeToo movement in the West.

Yellow posters are plastered on the walls of restaurants, clothing stores, juice bars, metro stations and taxis, reminding men that harassing women is a “crime” under Islamic law and that they must “respect the rights of other citizens”. ”

Don’t be a spectator

The @harasswatch webpage includes a map of Iran, with every reported incident of harassment marked. These “shared wounds indicate that we should move forward together” to improve sensitivity, he says.

A poster even shows morality police trying to detain a woman, with the words: “When a woman is being abused, don’t just be a bystander.”

“People’s opinions have changed…and the way people fight has changed; they have the media in their hands,” explains journalist Hemmati, who says the poster campaign is particularly effective in raising awareness.

Get stories that
empower and uplift Daily.

“If the morality police arrested you first, the girls were so worried that their parents would know. Now, if they are arrested, parents bring flowers to their daughters,” she said. People on the streets are also actively trying to intervene, to prevent arrests – and cheer when people are released.

Hardliners “cannot stop people from thinking and becoming enlightened,” Hemmati says. “Change runs through the heart of society and no one can stop it.”

2018-10-23
Previous Post: Three is not a good company for women looking for a job
Next Post: Betye Saar: The Artist Who Helped Ignite the Black Women’s Movement | Art