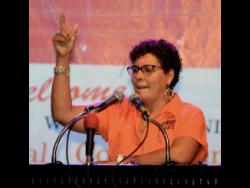 Businesswoman Patricia Duncan Sutherland has been re-elected president of the People’s National Party (PNP) women’s movement, pledging to push harder for the legalization of abortion in Jamaica and the implementation of the law on sexual harassment.

Duncan Sutherland, who is the organisation’s fifth leader, was re-elected on Sunday at the group’s annual conference.

“We have a lot of work to do around the right to choose as we believe women should have the right to choose whether to carry a pregnancy to term or not and we also want to advocate for paternity leave legislation” , Duncan said. sutherland said the gleaner.

The issue of abortion rights has sparked much discussion in recent weeks, especially after the U.S. Supreme Court overturned Roe v. Wade, a constitutional decision that had guaranteed the right to abortion for women for almost 50 years.

Abortion is largely illegal in Jamaica, but in recent years calls for change have intensified, with even lawmakers now publicly supporting the removal of restrictions. The opposition of the very influential Christian community remained unmoved.

Although the paternity leave debate has received some attention in recent years, limited progress has also been made in terms of introducing legislation to encourage the practice.

Duncan Sutherland believes this should be a legislative priority, as fathers play a crucial role as ‘partners’ in raising children.

His movement says it will also push for an increase in the number of social workers in communities plagued by violence.

“We will continue to advocate for an army of social workers, because an army of police and soldiers alone cannot solve the crime problem in Jamaica, cannot stop violence against children… What we have now doesn’t work for us,” the president said.

The move comes amid rising prices for basic goods and services and the release of a World Food Report last week that found an estimated two million Jamaicans, more than two-thirds of the population, n can’t afford healthy food.

Duncan Sutherland said the organization will lend its support to the PNP’s proposal to roll back the gas tax in light of rising commodity costs.

Duncan Sutherland is Chairman of the JMMB Joan Duncan Foundation and daughter of the late co-founder Joan Duncan, the architect of what is now the JMMB Group – one of Jamaica’s leading financial institutions.

She has lost past bids to represent Clarendon South Eastern in Parliament.

The PNP women’s movement has been criticized in the past for being soft on PNP figures who have been accused of sexist and misogynistic remarks.