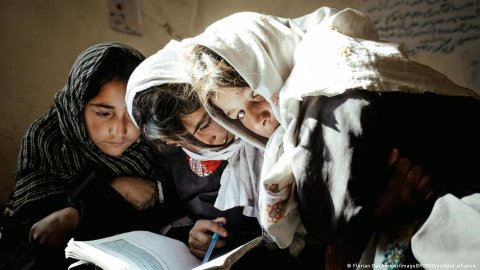 German human rights organization Pro Asyl has issued a public plea for help on behalf of 33 women’s rights activists in Afghanistan. The organization advocated for the women to be accepted immediately by the German government without further delay.

Pro Asyl said members of the United Voice of Women for Peace, a group of women’s rights activists in Afghanistan, were desperate to leave the country. The charity shared a letter from the group with the public, in which the activists said they must leave the country immediately:

“As well-connected experts and prominent women’s rights activists, we have always been in the public eye and known to many people – and therefore also the Taliban,” wrote the women, who had worked with the former Afghan Ministry of Peace. .

“Do not tolerate the social order of the Taliban!

The women said they had to hide from the Taliban after receiving several death threats in recent months: “We receive threats through text messages and letters.

“Get us out of here!” Get us and our families to safety! Don’t wait any longer, every day counts! the appeal dated March 7 read.

The group also stressed that “Afghanistan’s relapse into a social order in which women are excluded from public life, disenfranchised, abused, stoned and killed” should not be accepted by the international community, stressing that donations and aid payments to Afghanistan in particular should only take place on the condition that secondary schools are reopened to girls.

The conflict in Ukraine casts a shadow over Afghanistan

Pro Asyl said it fears the Taliban will use global attention on the war in Ukraine to “increasingly violently persecute”, torture and kill people in Afghanistan. According to the group, there are increasing reports of exit bans, house searches, arrests, intimidation and beatings against women. He also expressed concern that there might be cases of torture and extrajudicial executions in the country.

Pro Asyl also said that the German government must keep its promises to rescue those subject to reprisals in Afghanistan, in accordance with the government’s coalition treaty signed on December 7, 2021.

A member of the “United Voice of Women for Peace” reportedly told Pro Asyl that she managed to flee to Pakistan three months ago, but in light of recent events no one cared. of his case: “For more than three months, no institution in Germany has responded to any of our calls for help,” the publicly anonymous person told Pro Asyl.