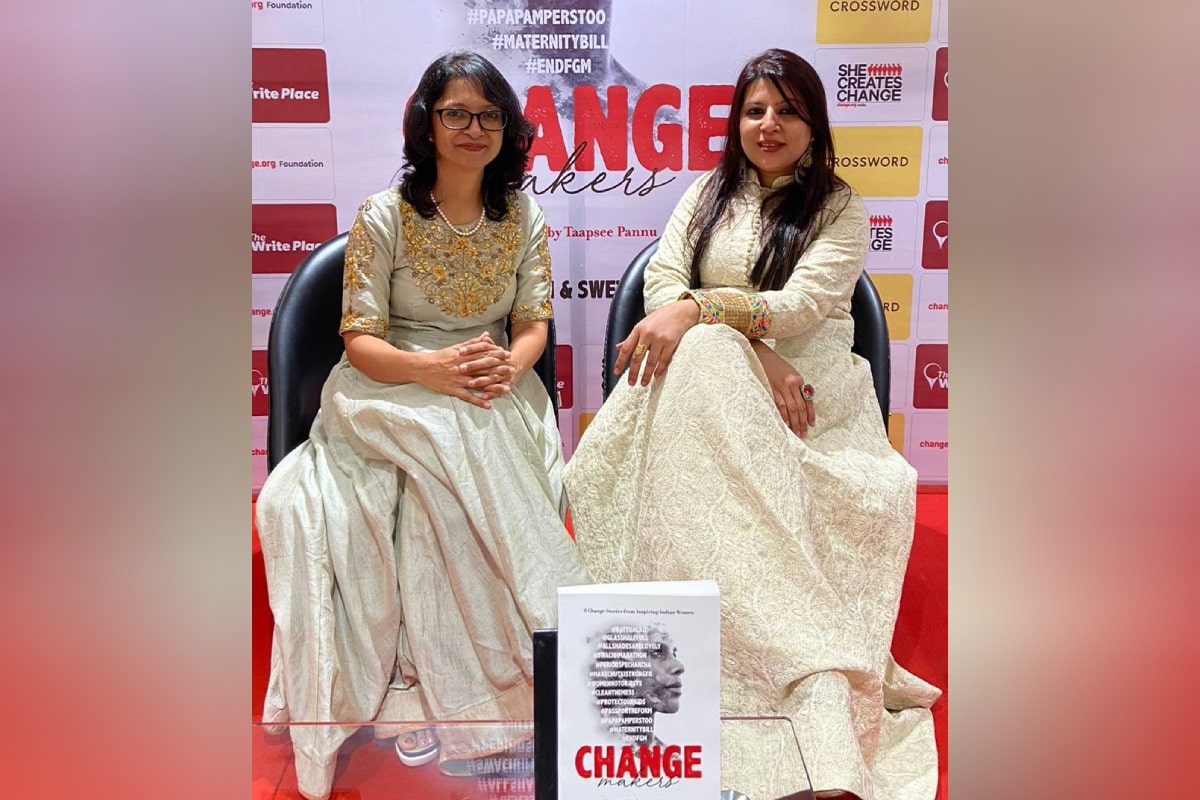 Changemakers: A Book About 11 Women Activists Behind Successful Online Petitions

In their book ‘Changemakers’, Almas Virani and Sweta Samota introduce readers to 11 women whose digital activism and petitions have made tangible changes on the ground.

As a child, Chandana Hiran grew up under constant harassment from people who advised her to try remedies to whiten her skin. Commercials for the fairness cream that projected dark-skinned women as failures took their toll. Years later, she launched the #AllShadesAreLovely campaign against colorism, which was instrumental in rebranding the popular fair trade cream brand Fair & Lovely to Glow & Lovely.

Chandana is one of 11 women activists whose stories were featured in the book Actors of change. From online campaigns such as #BattiJalao, #MaternityBill and #ENDFGM to petitions that led to policy changes, co-authors Almas Virani, a public speaking and podcast coach who writes about the genre, and Sweta Samota, author and book coach, shines the spotlight on women whose activism has made tangible changes on the ground.

The book is part of the digital activism platform Change.org initiative to document the stories of women whose petitions and campaigns have resulted in changes in laws and policies, creating impact at the local level. “Many of these women are known for their petitions, but we wanted the book to also reflect how important their personal journey is. The seed of change was planted somewhere along the way in their minds, we wanted to understand how it happened rather than just talking about their petitions, ”Almas told TNM.

“We thought that revisiting their childhood and gradually moving from one incident to another would strike a chord with readers, which in turn could make them question the causes they would like to support,” adds she does.

The preface by actor Taapsee Pannu also reflects the vision shared by the authors. “India is on the cusp of this change, where women have finally found their voice after decades. A voice that is not easy to silence. In fact, he climbs higher every time he’s silenced,», We read in an excerpt from the foreword.

The authors believe the book will change readers’ perceptions of digital activism and the common misconception that petitions go viral and get the job done overnight. On the contrary, it is a laborious affair for the militants whose objective is achieved only through constant efforts.

“Her story is deeply rooted in patriarchy, watered down with comments about the dowry her parents should pay due to her skin color or constant advice on applying malai or haldi to make her look more beautiful,Reads a line from Chandana Hiran’s chapter. When she decided to launch an online campaign to combat colorism, Chandana considered demanding a ban on fairness creams.

But after further introspection and research, she focused on specific goals and launched a campaign asking the International Indian Film Academy Awards (IIFA) to make a statement condemning Bollywood songs such as “Chittiyan Kalaiyan” and “Zandu balm” which objectify women. Although the IIFA did not follow up on its #WomenNotObjects campaign in 2019, Chandana continued to work on several campaigns and continued to speak out on several gender issues, gaining ground among many media users. social, including celebrities. It wasn’t until May 2020, when the Black Lives Matter movement gained momentum globally, that Chandana’s #AllShadesAreLovely campaign took off and was successful.

Much like the travels of the women on which the book is based, Almas and Sweta discuss how the process of writing the book has also been multifaceted and gradual. “It was both difficult and beautiful. We have spoken to each of them in numerous online calls. We had a lot of questions that would lead to hours of conversation. It took so long for some of them to tell their stories and open up. We then had to go back and understand what they were saying, interpret it, and then find the best way to get their stories across. The whole process of publishing the book took almost two years, ”Almas shares.

Both authors point out how difficult talking to women, while enriching, was. This forced them to revisit the traumatic and triggering experiences of their past.

Long before Masooma Ranalvi, the founder of WeSpeakOut, a collective that aims to ban female genital mutilation / cutting (FGM / C), wrote an open letter to the Prime Minister demanding a law banning FGM, she had to accept his inner turmoil. For Masooma, a FGM survivor, the path to activism has come with trials and tribulations. Almas and Sweta illustrate how Masooma, who was initially in denial about her traumatic experience with FGM as a child, has turned into a torchbearer for the cause.

READ: FGM is practiced in Kerala: an investigation

For human rights activist Srilekha Chakraborty who has worked in remote areas of Jharkhand to raise awareness of marital rape, violence, menstruation, gender and sexuality, acknowledging that her identity struggles have played a part huge role in its activism. Srilekha struggled to integrate as a child and therefore decided to work with marginalized communities. “For the first time, she had a weapon to create new stories out of the discrimination she encountered,” reads an excerpt from Srilekha’s chapter “The misfit changemaker”, adding that it enabled her to correct and combat discriminatory practices in the communities she worked with.

Shedding tears of joy and sorrow with the change makers who shared their stories was unique and empowering in equal parts, says Sweta. “We wanted to discover layers. For some it meant revisiting traumatic experiences while for others sharing their stories was therapeutic. Their openness to us also made us realize how they are all at different levels of healing, ”she shares. Sweta also adds that for some women looking back at their lives has given them a new perspective and allowed them to see events in a larger picture.

Asked about the next installments, Almas assures us that this will certainly not be the only book. “I wanted to start a podcast and amplify the voices of the women in Change.org’s ‘She Creates Change’ program. So we’re going to be working on a sequel or other projects like a podcast in the future, ”she said.

The book is available for purchase here.