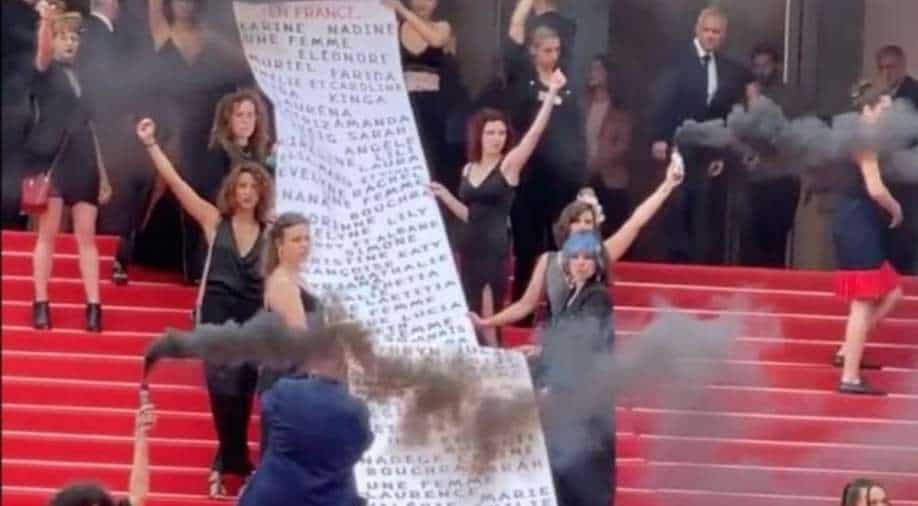 A few days after a woman stripped naked and protested rape on the Cannes red carpet, a group of women activists are once again taking advantage of this prestigious event to raise awareness against male violence.

A group of women wearing black clothes walked the red carpet with a white banner representing the victims of domestic violence in France. Protesters were also holding smoke grenades.

There is no information about who led this protest. However, the banner carried the names of a total of 129 female victims of domestic violence since France’s last Cannes festival, per Daily Mail.

Videos and photos from the event have taken the internet by storm.

Protesters walked the red carpet just before the ‘Holy Spider’ premiere. Director Ali Abbasi’s film is set in the city of Mashhad, Iran, and follows the story of a journalist investigating a serial killer who killed several sex workers in the city.

The film is loosely based on the real-life story of serial killer Saeed Hanaei, who killed 16 women between 2000 and 2001.

Cannes 2022: Deepika Padukone is adorable in a retro outfit with green polka dots

It was the second demonstration of the French festival, before this one an unidentified woman protested against sexual violence in Ukraine amid the Russian invasion. It happened at the premiere of George Miller’s “Three Thousand Years of Longing”.

The woman who shouted “Don’t rape us!” stripped naked on the red carpet and showed the message “Stop Raping Us” written on her chest alongside the blue and yellow Ukrainian flag colors painted on her body.