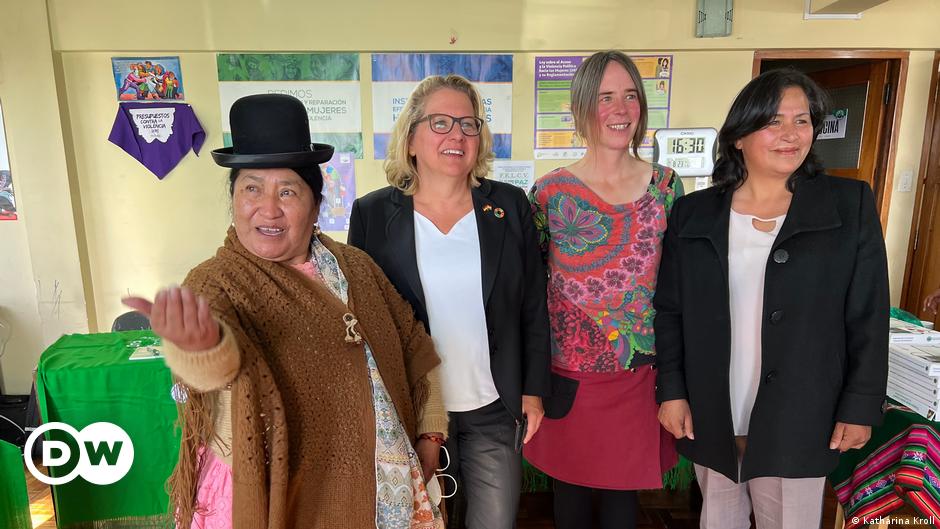 Lucrecia Huayhua considers herself a fighter. She now fights for other women so they don’t have to go through what she herself went through.

Born in a village, she had 12 siblings and at the age of eight she was brought to the Bolivian capital La Paz where she had to earn money as a maid. “I didn’t understand at all what was happening to me at that time,” she says. “I was always told: ‘You are worth nothing.’ I was treated very, very badly. I had a difficult life. It’s still painful for her to talk about today.

Even as a grown woman, Huayhua went through similar experiences and eventually escaped her abusive husband with her children. She says she was lucky to find the activists of the OMAK project, the “Organización de Mujeres Aymaras del Kollasuyo” (Organization of Aymara women of Kollasuyo). It was a moment that fundamentally changed her life as she suddenly realized that she too had rights. “I understood for the first time that I was worth something. And that I was allowed to have dreams,” she says.

Three out of four women in Bolivia say they have experienced violence from their partner. Each year, 120 women are killed in the country. Relative to population, this is one of the highest rates of femicide in Latin America.

“Women need more rights, and they need to be enforced,” said German Development Minister Svenja Schulze, speaking to women in the OMAK project in El Alto, which Germany is helping financially. “We want to focus more on a feminist development policy. Because we strongly believe that societies become more humane when women have equal rights.” That is why the Minister is determined to ensure that women receive targeted support.

Violence is transmitted from generation to generation

“The goal of our work is for women to come out of these violent relationships and become ambassadors against violence and for equality,” says Eva Pevec, National Coordinator at International Christian Peace Service EIRENE, an OMAC partner. . “They then draw on their own experience to help others.” Lucrecia Huayhua is a living example of this: she has undergone training and now fights for the rights of women victims of violence.

“There’s a lot of machismo in Bolivia, which is considered quite normal here,” Pevec says. “Violence is a part of life, considered a normal human characteristic. So men are allowed to beat their wives. And parents beat their children.” The violence is passed down from generation to generation and rarely questioned, she says.

Often it is only when women join the project that they have the opportunity to talk about what has happened to them. And what they themselves passed on to their children. It’s often a very painful process, says Pevec.

Bolivia is one of the poorest countries in South America. About 80% of the working age population has no regular job and therefore no security. People live hand to mouth, selling their small crops in markets and working as street vendors or shoe shiners. Additionally, during the COVID-19 pandemic, the Bolivian economy suffered a massive collapse and violence increased during the harsh lockdowns. “In addition, there is a lot of uncertainty in the country. People feel that many reforms need to be addressed urgently,” says Jan Souverein, head of the Bolivian branch of the Friedrich Ebert Foundation, affiliated with the center. -left of Svenja Schulze. Social Democratic Party (SPD). “The judiciary, for example, is corrupt and in a terrible state,” he explains.

“Murderers and violent criminals can buy their way out. That’s why many women don’t report crimes against them,” EIRENE’s Pevec adds. In 2013, Bolivia introduced a law to protect women against all types of violence and the crime of femicide was even included in the penal code and carries a maximum penalty. “But because of corruption, the law is not enforced.”

It has been a long time since a German government minister visited Bolivia. “I came here because Germany wants to show more presence in Latin America. Democracies should strengthen each other,” Schulze said.

The Minister of Development also wishes to strengthen cooperation on the protection of the Amazon rainforest and on the energy transition towards renewable energies. Germany funds development cooperation projects in Bolivia to the tune of nearly 300 million euros ($297 million). And her new feminist concept of foreign and development policy will mean more support for projects like the Aymara women’s.

“I want a world without violence,” says Lucrecia Huayhua. “I will continue to fight for this with my heart, soul and spirit all my life.”

This article was originally written in German.

While You’re Here: Every Tuesday, DW editors round up what’s happening in German politics and society. You can sign up for the weekly Berlin Briefing email newsletter here.