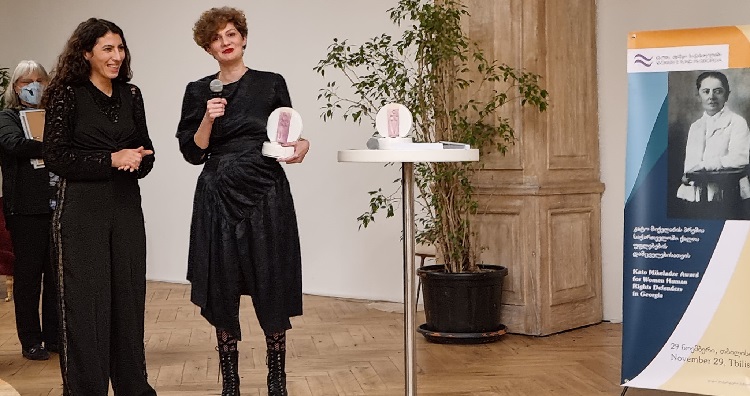 Three women’s rights activists – Baia Pataraia, Eliso Rukhadze and Tozu Gulmamedli – received the Kato Mikeladze Award from the Women’s Fund for their dedication to gender equality and the protection of women’s rights in Georgia.

Tozu Gulmamedli is an activist working with ethnic minority women and founder of the Iormughanlo Community Center which provides young people from minority communities with opportunities for development and empowerment.

I really didn’t expect to be one of the award winners. I am relatively young and inexperienced compared to the other candidates but I am very happy, ”said Tozu Gulmamedli.

Eliso Rukhadze is a lawyer who has represented women and girls survivors of violence at the Sapari shelter since 2017, and has worked to contribute to the resocialization and economic empowerment of its beneficiaries.

Baia Pataraia is a human rights defender who since 2013 has led the non-governmental organization Sapari involved in working across Georgia on issues of early marriage, domestic violence, sexual harassment and more.

Pataraia has worked to provide professional training on gender-based violence and discrimination to professionals in the public service, including judges, lawyers and police, and is the founder of the informal feminist group Women’s Movement.

Such an honor to be at #KatoMikeladze award organized by Women’s Fund Georgia.

The Kato Mikeladze Prize is named after a Georgian feminist and activist who published articles and led activism on women’s rights and gender equality in Georgia between the late 19th century and the 1920s.

The 2021 edition of the awards took place as part of the 16 Global Days of Activism Against Gender-Based Violence. Known as 16 Days, the campaign has united more than 6,000 organizations in approximately 187 states since its inception in 1991.