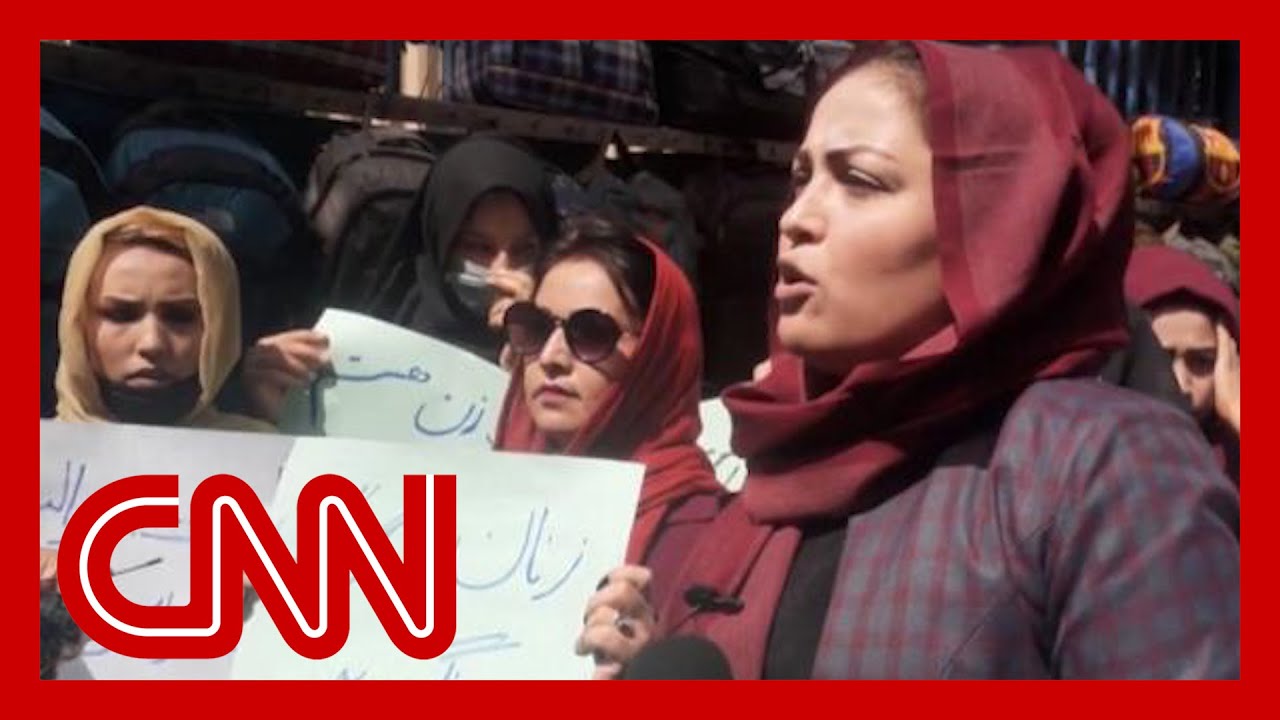 (OpenDemocracy.net) – “You are all cowardly women for protesting the burqa. Why don’t you want to cover your body? You are not Muslim,” a female Taliban fighter shouted at Zoya* as she led a march of 20 women in Kabul on Tuesday. Zoya, 38, a women’s rights activist and mother of five, was demonstrating last Saturday against the Taliban’s controversial burqa decree.

Women’s rights activists demonstrate in Kabul against the new face covering order, despite threats and the risk of imprisonment.

The decree states that women must cover their faces in public, wearing either the head-to-toe burqa, which has a face grid, or the niqab, which covers the face except for an opening for the eyes. Most women in Afghanistan wear a head covering but do not cover their faces, although women in rural areas tend to dress more conservatively.

It is the latest addition to a series of restrictions imposed by the Taliban since they took control of Afghanistan last August. Women are not allowed to seek employment, except in jobs that can only be done by female employees (such as midwives, seamstresses, and some administrative positions); and girls between grades 7 and 12 were banned from attending secondary school.

The edict, issued by the Ministry of Propagation of Virtue and Prevention of Vice, alarmed not only Afghan women, but also the international community, which condemned the most recent suppression of women’s rights in the country. The United Nations Assistance Mission in Afghanistan (UNAMA) said it was “deeply concerned” by the decision.

Zoya and other activists rallied as soon as they heard rumors of the new edict, a day before it was announced. As soon as the women began their protest in the capital, carrying signs reading “No to compulsory burqa” and “The burqa is not our hijab”, they were confronted by armed Taliban fighters.

“They yelled at us. They pointed guns and threatened to attack some of the protesters. They called us cowardly women with no morals or character. You could translate that to the worst word you can use for women in English. That’s what they said,” a distraught Zoya explained.

“One of the talibés turned to a female protester, whom he knew to be Pashtun, and asked her why she was joining a protest with women like us Tajiks who are not Muslim. It was terrible. We were detained for two hours, interrogated, threatened and warned that if we continued we would be imprisoned for these protests.

Samira*, 25, another women’s rights activist, also protested in Kabul on Monday against the new decree. She explained what happened: “We cannot just sit back and accept these restrictions imposed on us by the Taliban. They can’t just suppress our voices. At 10 am I reached a park and spoke to the women there, and asked them if they would join my protest against the Taliban. I was honestly surprised they agreed, given the recent news of kidnappings and enforced disappearances of female protesters. We united and claimed our rights.

Samira’s life changed overnight when Kabul fell. Previously, she ran a successful clothing business in Kabul alongside two male business partners. As soon as the Taliban took control of the city, it was announced that women had to stop working and had to be accompanied by mehrams (male relatives). “I had two men as partners and we weren’t allowed to work together anymore. I was forced to close my business. I was also opening a small restaurant. They have made me change my life enough. I can’t let them dominate my clothing choices,” Samira said.

My three daughters cannot go to school. If I don’t fight for them today, who else will?

Zoya worked for 18 years as a teacher, but lost her job when the Taliban closed schools for older girls. She wants to defend the rights of girls excluded from classrooms and Afghan women whose voices are silenced. “We went back 20 years to the day the Taliban arrived here. My three daughters cannot go to school. If I don’t fight for them today, who else will? asked Zoya. There are no restrictions for her two school-age sons.

Samira, Zoya and the dozens of other activists who demonstrated unanimously reject the new rule. “We do not and will not wear burkas. We already wear a hijab, it’s our choice,” Zoya said.

In an equally provocative tone, Samira added: “You cannot make half the population of the country disappear. We will defy these restrictions and only we women can choose what we want to wear. All I ask is that the Taliban change these rules and give us our freedom. For now, I won’t wear it, even if they threaten to kill me.

As part of the new decree, the Taliban also announced that they will arrest male relatives of women who refuse to cover themselves from head to toe. Despite these threats, Zoya and Samira chose to oppose the Taliban. Zoya said, “My husband and my male family members first asked me to avoid these protests, but now they have decided to support my fight for women’s rights. The men and women of Afghanistan have united to oppose this regime. We don’t want them to rule us.

Supporting Zoya’s position, Samira added: “It’s the same in my family too. My mother is worried about my safety and asked me to avoid demonstrations. But in the end, they support my choices and understand that if we don’t unite against this rule, nothing will change in our beautiful homeland.

Women’s rights activists have been under threat since marching through the streets, days after the Taliban first banned women from working. One of the most vocal civil rights activists leading the protests is Hoda Khamosh, who represented Afghan women at the humanitarian crisis talks in Oslo. In January 2022, seated across from a table of Taliban officials, Khamosh stood up and demanded that they call Kabul and release the imprisoned protesters.

Speaking this week about the decree on the compulsory wearing of the veil, Khamosh said: “No one has recognized the Taliban as a government and all the promises they made at international summits have not yet been fulfilled. Not only are they not stopping targeted killings, but they are also trying to erase women from society. By imposing this rule, they are trying to confine women within four walls. The Taliban are doing this because it is us women who have opposed them. They believe that women are slaves and not humans. They think we only exist to get married and have children. The Taliban don’t think we can do anything else.

Khamosh’s demands against the Taliban in Oslo were in response to the forced killings, kidnappings and raids, which continue to make headlines. Last September, female demonstrators and women’s rights activists protesting the ban on education and jobs were beaten by the Taliban in Kabul and Herat.

However, these violent encounters and threats failed to shake the will of Afghan women. “If they think we’re going to stop protesting after yesterday’s verbal attacks, they’re wrong.” Zoya said. “I am fighting for the future of my daughters and many others in our country. We plan to walk again. Not only against the burqa decree, but also for education, hunger, poverty and job rights.

*Names have been changed to protect identities

Deepa Parent is a freelance journalist based in Paris. It covers international conflicts and the consequences of war on human rights. She reports on the refugee crisis, women’s rights and the role of geopolitics in conflict zones. Deepa holds an MA in Media and International Conflict from University College Dublin, where she studied conflict reporting with a focus on US foreign policy and public diplomacy.

This article is published under the Creative Commons Attribution-NonCommercial 4.0 International License.