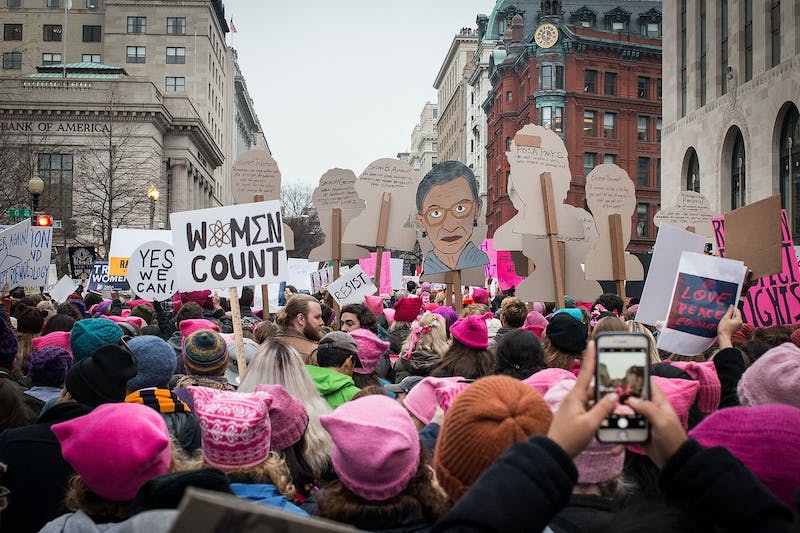 Activists highlight the need for women’s empowerment in politics

The Aronson Center for International Studies hosted the third event in its Fall 2020 Human Rights Lecture Series to discuss the theme “Women and Conflict” on Thursday, October 29.

Sophomore Kevin LaMonica, student coordinator of the speaker series, pointed out that since so much of the International Studies programming revolves around security and foreign policy issues, he wanted to focus this series speakers on topics from the perspective of the Global South.

LaMonica pointed out that these speakers represented a variety of professional fields.

“The trifecta deep inside me was someone in a non-governmental organization or civil society space, an academia and someone on the ground as an activist. This event hit the trifecta,” he said.

During the panel discussion, Karman spoke about her experience in advocating for women’s rights in the peacebuilding process in Yemen. She described the importance of assessing the roles that women play in times of war and armed conflict.

“To simply say that women are victims of war without paying any attention to the power of women leading societies for freedom is an act that harms women and harms peace,” she said. .

Balogun implored the public to change their perception of women as a homogenous group. She stressed that current models of mediation need to be rebuilt to accommodate women’s agency and leadership.

“Mediation spaces are designed for men and belligerents. In these sites, there is a lot of insecurity for women because these are spaces in which they are traditionally not allowed,” she said.

Rimmer described how, during these conflict discussion processes, people often place certain demands on women and question their representation. However, she replied that these matters should remain separate from the general agenda.

“Women have a right to be at a table regardless of their opinion, and we don’t ask men to justify their credibility or merit,” she said.

Karman stressed that it was crucial for women to be represented at all levels of state authority. According to her, there is a lack of legislation granting women the constitutional right to equal representation in government, especially in countries where women are seen as conservative and traditional.

She further clarified that it should be written in the constitution that women should have the right to hold decision-making positions. However, Karman said governments often abuse their power and treat women in these positions as a backdrop to help their image.

In these situations, Rimmer explained that non-governmental organizations (NGOs) were designed to support the efforts of women on the frontlines by ensuring that their voices are heard and that they receive appropriate funding. In Rimmer’s experience, however, that is not the case.

Balogun pointed out that international NGOs also lack the skills and capacity to properly handle situations in war and armed conflict regions.

“Women become more at risk when displaced because gender norms are emphasized and they have to conform to them,” Balogun said.

Freshman Irene Kang wrote that she actively seeks opportunities to participate in conversations about women’s rights and empowerment in an email to The News-Letter.

“I was particularly interested in learning more about this topic compared to what I know of my mother’s own experience as a female US Army soldier deployed to Afghanistan,” she wrote.

Junior Noelle Curtis wrote in an email to The News-Letter that the event offered a unique opportunity to hear how women in politics and activist groups have shaped the global sphere.

“Each of the incredible women came from different backgrounds, but being able to hear their stories in person really put into perspective what women’s empowerment and activism looked like on a global scale,” she said. writing.

Kang enjoyed the event and felt lucky to learn from the accomplished women. However, she wished that participants had more opportunities to participate in the discussion.

“More options for audience participation would be ideal for integrating the integral social aspects of speaker events,” she wrote.

Freshman David Donald wrote in an email to The News-Letter that he appreciated the diversity among the panelists but suggested that the discussion could have been formatted differently.

“I would have liked to see more interaction between the three speakers to create a more argumentative environment,” he wrote.

The biggest takeaway from Kang is that the international community has an important choice to make in how it approaches peacebuilding.

“They can continue with a framework that systematically excludes the majority of women and increases militarization, conflict and fractured societies or work towards a broader consideration of women’s roles and ways to prevent conflict and gender-based violence to create peaceful and inclusive communities,” she wrote.